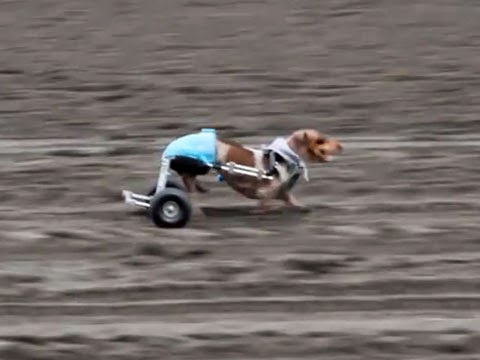 Anderson Pooper is a “differently-abled” dachshund who competed in a dachshund dog race in Washington last week.

Did he win? He’s already a winner, so it didn’t matter much what place he came in 🙂

I love this story because I lived a bit of this kind of canine-challenge.

My pal Bruno the wonder dog (sitting right next to me as I type) was paralyzed by in an accident when he was five years old. After a very serious back surgery, we were told he might not regain use of his legs, but he could be fitted for “wheels” for his back legs. Shaken by the news but resolute to do whatever we could for Bruno, the dog said that dogs cope with such tragedies well. They don’t get stuck in “sad” – they just learn to cope.

For weeks Bruno couldn’t walk. But slowly, with Michael and I doing physical therapy with him every day, he got back up on his feet. A long slow process.

Today, he’s great. He only recovered about 70% of his back leg strength, but he walks and runs on his own. His run is kind of like a gallop, but I smile every day he gallops across the backyard.

Watch the video of the race below: