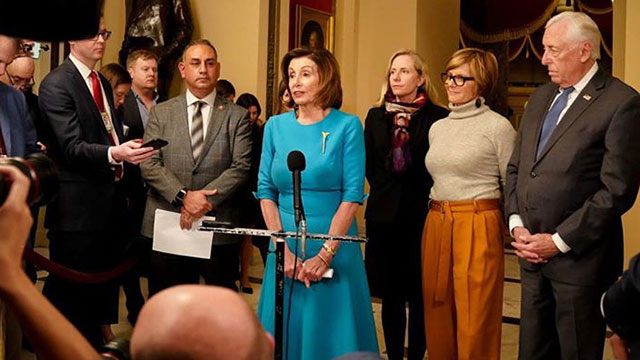 Under Speaker of the House Nancy Pelosi’s leadership, the House passed an economic relief bill by a vote of 363-40 providing billions of dollars for paid sick leave, unemployment insurance, free testing and other measures to help Americans impacted by the coronavirus crisis.

The legislation came about after tense negotiations between Pelosi (D-Calif.) and Treasury Secretary Steven Mnuchin.

The Washington Post reports that the agreement “threatened to fall apart entirely for hours Friday amid GOP misgivings.”

Although Donald Trump was openly critical of House Democrats during an afternoon news conference Pelosi and Mnuchin continued negotiations over the course of a reported 13 phone calls throughout the day until the deal was ultimately reached.

Lawmakers voted on the bill just before 1 am Saturday morning. All 40 ‘no’ votes were from Republicans.

The legislation now heads to the Senate, which is expected to pass it next week.

According to the Associated Press, the relief bill will:

• Establish a temporary coronavirus-related sick leave benefit to be paid by employers with less than 500 employees. Businesses will be refunded by the federal government through a refundable tax credit. Employees with the coronavirus would receive 100 percent of their wages if diagnosed with the virus or are self-isolating. Folks taking care of family members would receive two-thirds of their pay.

• Up to $1.3 billion in emergency food aid for low-income pregnant women and their young children, seniors, and food banks.

• Require the Occupational Safety and Health Administration to issue a temporary rule requiring increased protections against the coronavirus.

Finally sensing the full gravity of the circumstances, Donald Trump weighed in via tweet in support of the legislation:

Here’s a list of the 40 House Republicans who voted against the coronavirus relief package. Many of them criticized the process and complained about a lack of time to review the 110-page bill since it was unveiled less than an hour before the vote started. pic.twitter.com/ke8NMe0ZIR

McConnell signaled in a statement overnight he is likely to back House bill and Senate will take it up next week. “But I believe the vast majority of Senators in both parties will agree we should act swiftly to secure relief for American workers, families, and small businesses”