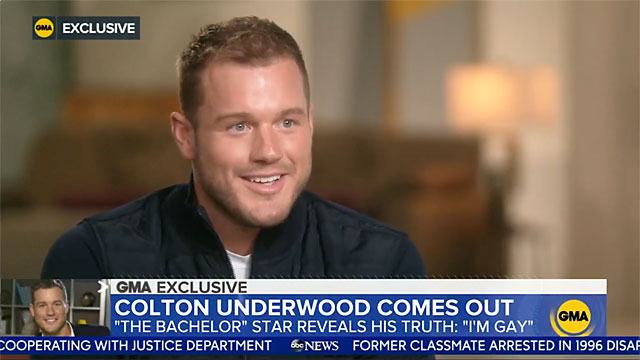 Former ‘Bachelor’ star Colton Underwood came out as gay in an interview with Good Morning America’s Robin Roberts this morning.

Underwood, who was a former pro football player prior to his time on ‘The Bachelor,’ said the past year of pandemic quarantine led to face some truths about himself.

“I’m still nervous, but yeah,” he continued. “It’s been a journey for sure.”

Underwood said he finally got to a place where he could be honest with himself after 2020, the year that turned everyone’s lives upside down, and made people “look at themselves in the mirror and figure out who they are and what they’ve been running from or what they’ve been putting off in their lives.”

When Roberts, who is also openly gay, said she could “see the joy” and “see the relief” in Underwood, he said he was “emotional in, like such a good, happy, positive way,” and is “the happiest and healthiest” he’s ever been.

The nervousness in Underwood’s voice is palpable as he gets to the words “I’m gay.”

Having gone through my own coming out process years ago, I immediately felt that rush of nerves and emotion that happens for people in that moment. And then I tried to imagine being someone known by millions and handling such a personal life episode in such a public forum.

Bachelor Nation, as the fandom of the franchise is called, first met Underwood when he was a contestant during the 14th season of “The Bachelorette” in 2018. He reappeared on the 4th season of “Bachelor in Paradise,” and was then the lead of season 23 of ‘The Bachelor’ were he was famously nicknamed the ‘Virgin Bachelor.’

“I fully was a virgin before that, and I could never give anybody a good enough answer about why I was a virgin,” says Underwood about  his “Virgin Bachelor” status during his time on the show. “The truth is I was the ‘Virgin Bachelor’ because I was gay, and I didn’t know how to handle it.”

Since his time on the show, Underwood continued to give interviews saying ‘The Bachelor’ helped him realize that he was not gay after many in his life had questioned if he were gay since he was a football player and a virgin.

Last year, he released his book The First Time: Finding Myself and Looking for Love on Reality TV where he shared having questioned his sexuality through his teen years, after relentless bullying from teammates. In the book,  he remembers searching online “Am I gay?” as far back as elementary school.

Today, it seems Colton Underwood has moved past those personal demons.