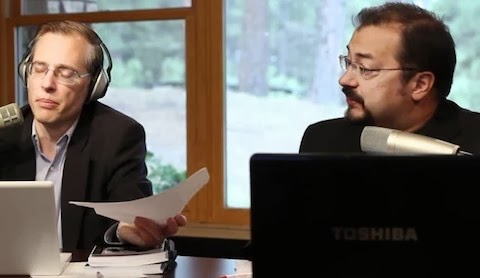 Pastors Kevin Swanson and Dave Buehner of Generations Radio are upset about a float at the Rose Bowl parade that included a married gay couple which, despite nasty attacks from anti-gay activists, went off without incident (and even won an award).

Buehner was perplexed by the fact that the AIDS Healthcare Foundation sponsored the float, saying that its “pro-homosexual propaganda” would “spread AIDS.”

He added: “I wonder what the Rose Bowl parade would do if we had the stoning of a homosexual along the parade just as an expression of free speech and all that.”

Swanson: They’ll also witness a controversial same-sex wedding, courtesy of the AIDS Healthcare Foundation. According to the Pasadena Star News, a pair of homosexual hairstylists will ‘marry’ along the parade route while riding a wedding cake-shaped float sponsored by the AIDS group.

Swanson: They may be serving lemonade too as part of the event, I hope not but maybe.

Buehner: I wonder what the Rose Bowl parade would do if we had the stoning of a homosexual along the parade just as an expression of free speech and all that.

Swanson: I think that would be rejected by the Rose Bowl parade committee.

Buehner: Well what if the stones were just made like of flowers and flower pedals?

Swanson: I don’t know if they’d allow that or not. Anyway ladies and gentlemen, this is another instance in which the degradation of our society is going mainstream.

So, just so I’m clear: Buehner wants to compare the exchange of loving marriage vows with staging a violent stoning death of a human being?

Really? Is that what Christ would do?

Swanson went on to say that the gay community is “coming after Christians” and will have them “burned at the stake.”

He described the fight as a “battle between good and evil,” warning “Christians will be destroyed by the other side” unless the government begins to “prosecute homosexuality, especially public acts of homosexuality.”