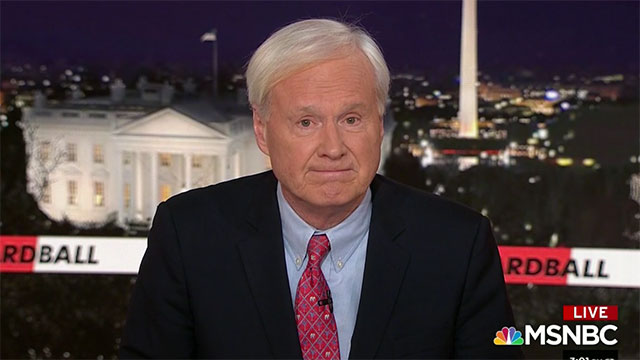 For years I have watched MSNBC’s Hardball with Chris Matthews. It comes on at 4pm in my time zone, and that times out well with my work schedule and I can catch up on news I might have missed.

I like Chris, although he’s gotten a bit flint-ier in recent years, but he’s smart, experienced, and I liked the pace of the show.

As I tuned in today, Chris announced at the top of the show he was retiring. Like, now.

He spoke for about two minutes, told his audience he will miss them but after a conversation with network heads, he decided to retire today.

He spoke of his love of politics, apologized for any comments he has made about women, and then he abruptly left.

He seemed to reference the report by writer Laura Bassett who penned an essay last week accusing Matthew of flirting with her in 2016.

Bassett wrote that before an appearance on Hardball she was in the makeup chair next to him when he allegedly said, “Why haven’t I fallen in love with you yet?”

After the commercial break, Steve Kornacki was on camera looking stunned and said “we have to fill the hour.”

And here's the shot when the commercial break ended and the camera cut to a stunned Steve Kornacki, who was obviously not prepared for Chris Matthews' announcement, nor to fill in the hour of airtime when #Hardball would usually run. pic.twitter.com/idqhwvi3rl

THAT WAS IT. Chris Mathews is out of the building. @SteveKornacki runs to the desk, in tears, voice breaking with "I'm shocked. We'll take another break."#Hardball