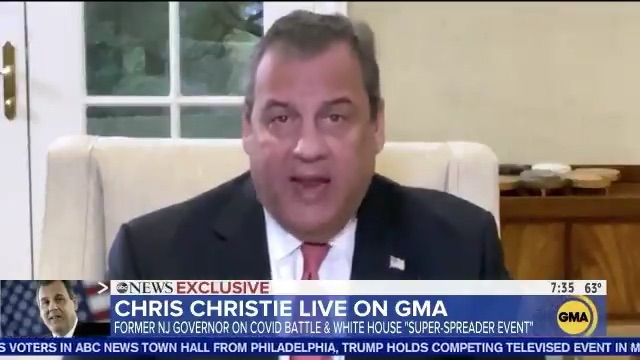 Former New Jersey Gov. Chris Christie, who participated in Donald Trump’s preparation before the first presidential debate (after which it was discovered Trump was coronavirus+), shares with USA Today the remorse he feels for not wearing a face mask amid the COVID-19 pandemic after he was diagnosed with the virus and had to be hospitalized for a week.

Former Gov. Chris Christie said Thursday he was “wrong” not to wear a mask in the days before testing positive for COVID-19, but that he felt at that time that he was in a “safe zone” because of frequent testing.

Having spent a week being treated for the disease caused by the coronavirus – in an intensive care unit – Christie said he had a chance for greater reflection about his actions and the virus.

“It is something to take very seriously. The ramifications are wildly random and potentially deadly,” Christie said in a statement, first reported by the New York Times. “No one should be happy to get the virus and no one should be cavalier about being infected or infecting others.”

“I was wrong,” Christie said.

Christie shares that he was given access to “extraordinary treatments,” including the anti-viral Remdesivir and a cocktail by the pharmaceutical company Eli Lilly. He concluded those factors, which are not available to you nor I, “contributed to my good health today.”

Former NJ Gov. Chris Christie to @GMA after his stint in the hospital with COVID: "We need to be telling people that there is no downside to you wearing masks, and in fact, there can be a great deal of upside." pic.twitter.com/QMpbPDu2xN