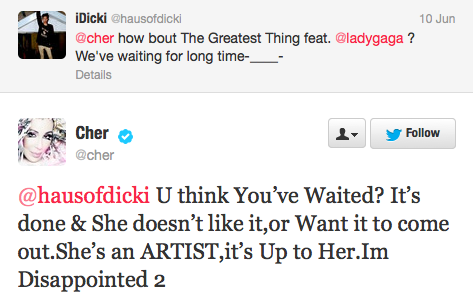 A fan asked Cher on Twitter about her recorded duet with Lady Gaga – “The Greatest Thing,” saying fans have been waiting a long time.

Cher tweeted, “U Think You’ve Waited? It’s done & she doesn’t like it, or want it to come out.”

Cher brought up her concerns on The Voice last night, saying: ”I did a song with Gaga and I think it’s brilliant and I thought her performance was great but she doesn’t like it.”

Is Cher respecting Gaga’s artistic feelings? Or mocking her?