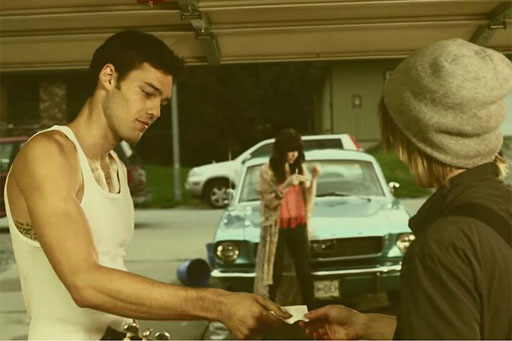 We all recall the huge reception Carly Rae Jepsen’s “Call Me Maybe” music video received when it was released in 2012.

Fans hit the video up to the tune of over 1 billion views.

The light-hearted story for the video featured Carly Rae pining for the hunky, shirtless guy next door, but in the end he gives his phone number to a male member of her band.

Well, it turns out the actor who played the hunky neighbor, Holden Nowell, wasn’t all that thrilled with how the music video turned out.

“It’s what people began to recognize me as and know me as, and it was only that,” Nowell recently told iHeartRadio Canada. “It was really difficult for me and really frustrating.

“I was always the ‘Call Me Maybe’ guy, everywhere I went, and after awhile I got really sick of hearing that.”

And a big part of his unhappiness came in having to play gay at the end of the video.

“The fact that they had to make me gay at the end of the video … it was all very … I didn’t like being known as the gay guy in the ‘Call Me Maybe’ video. It was just something I wasn’t used to,” Nowell recently told iHeartRadio Canada.

According to Nowell, the original script for the video called for “hunky neighbor” to kiss Carly Rae’s band guy. And Nowell was not having it.

“I was like, ‘I’m going to be completely honest with you. I’m not going to kiss a guy, especially for $500.’ I said, ‘I really don’t think I’m comfortable kissing a guy for a music video.”

Nowell says it was his idea to end the video with handing his phone number to the band member.

The 29-year-old also seems a tad bitter he was never paid any royalties for his one day of work on the video. “I don’t know who ended up making my money, but I never saw a single penny for it,” says Nowell.

The actor also shares he hasn’t spoken to Jepsen since the video premiered. “I personally don’t have anything positive to say about Carly Rae,” he said. “She won awards because of that video and she never reached out to me.”

He also doesn’t have many fond memories of working in the modeling industry.

“‘Gay for pay’ is literally what runs the male modelling industry and I don’t get down like that. I think people should be allowed to love who they want to love, but I love women. There’s no amount of money, no amount of fame that could ever make me… I couldn’t do something that didn’t feel right in my soul.”

Now, Nowell’s mad about how the interview ended up because he feels it paints him in a homophobic vein.

He posted the url to the interview on his Instagram saying, “I guess it’s true what they say, there’s no such thing as bad publicity… but man, this is pretty bad… Apparently I’m a narcissistic – bitter – slanderous gay bashing – Hitler loving – free thinking – outspoken – “conspiracy theorist” who bags on his pops… Wait, but, aren’t you?!?! I mean, aren’t I?!?! 🤪#GottaLoveJournalists “Thanks for the support, Asshole.”

This is where folks have to learn that everything that comes out of their mouth in an interview can be read by millions of people.

BRAND NEW INTERVIEW!!! CLICK THE LINK OR COPY & PASTE THE URL FOR FULL INTERVIEW AND ARTICLE… http://www.iheartradio.ca/news/exclusive-holden-nowell-tries-to-move-past-call-me-maybe-1.3876622 …I guess it’s true what they say, there’s no such thing as bad publicity… but man, this is pretty bad… Apparently I’m a narcissistic – bitter – slanderous gay bashing – Hitler loving – free thinking – outspoken – “conspiracy theorist” who bags on his pops… Wait, but, aren’t you?!?! I mean, aren’t I?!?! 🤪#GottaLoveJournalists “Thanks for the support, Asshole.” #iAmWhateverYouSayiam #IfiWasntThenWhyWouldiSayiAm #OnThePaperTheNewsEverydayIAm #iHeartRadioWontEvenPlayMyJam
A post shared by Holden Nowell A.K.A. SixXx’Tre (@holdenelijanowell) on Jun 7, 2018 at 9:39pm PDT

Nowell released his debut album Fade II Black on June 6 under his rap alter-ego SixXx’Tre, and feels confident about the work.

“This is going to be the most groundbreaking iconic hip hop album since probably The Marshall Mathers LP,” says Nowell. “I know my worth as a human being, as an artist. This is my calling.”