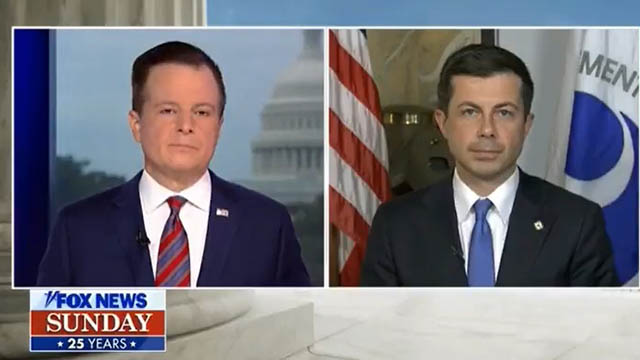 During an interview on Fox News Sunday, Transportation Secretary Pete Buttigieg was asked about a tweet that his husband, Chasten, posted regarding Supreme Court Justice Brett Kavanaugh. The tweet drew the ire of conservatives.

Last week, Kavanaugh told the media he felt compelled to exit a restaurant in DC via its back door after abortion rights protesters showed up expressing their opinion about the recent reversal of Roe v. Wade.

Chasten commented on Twitter, “Sounds like he just wanted some privacy to make his own dining decisions,” riffing on the issue of the right of women to make their own decisions about their bodies.

“Look, when public officials go into public life, we should expect two things,” he says. “One, you should always be free from violence, harassment, and intimidation. And two, you’re never going to be free from criticism or peaceful protests, people exercising their First Amendment rights. That’s what happened in this case.”

“Remember, the justice never even came into contact with these protesters. Reportedly didn’t see or hear them,” Buttigieg said. “And these protesters are upset because a right, an important right that the majority of Americans support, was taken away, not only the right to choose, by the way, but this justice was part of the process of stripping away the right to privacy.”

When Emanuel pressed further on whether the protest was “appropriate,” Pete responded, “Protesting peacefully outside in a public space? Sure. Look, I can’t even tell you the number of spaces, venues, and scenarios where I’ve been protested,” Buttigieg said.