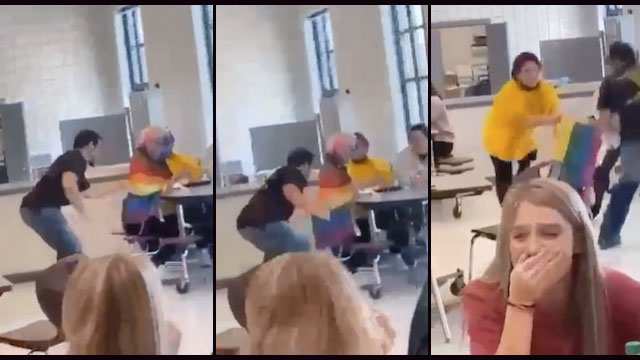 A video that went viral last week appears to show an ugly, homophobic attack on a high school student wrapped in a rainbow flag.

The incident, which took place at Lowndes High School in Valdosta, Georgia, was investigated by school officials and the local Sheriff’s office.

In the clip, a young man in a black t-shirt runs up to a male student with a Pride flag wrapped around his neck. The bully attempts to snatch the flag from the other boy’s neck, but ends up knocking the boy to the ground and dragging him on the floor.

A friend tries to intercede, but is shoved away by the teen in the black shirt. Eventually, black shirt boy manages to break away with the flag, throws it in a trash can, and knocks it over.

The video clip has received over 5.6 million views on Twitter alone.

The Twitter user who originally posted the video wrote in his tweet that he had attended the school and his brother is currently a student there.

“I need everyone to see the scum that’s here in South Ga this just happened today at Lowndes High School,” user @jrcamachobass wrote.

In a follow-up tweet, he added that black shirt boy was apparently dared to do it for $5.

By the way, shame on the students like the girl in the red t-shirt who laughs at the assault instead of doing something.

Also: there are plenty of people (like the person who recorded the video) who are defending the assaulter’s actions so we gotta be loud and vocal to make sure these homophobes don’t ever think it’s cool to do something like this

Rodney Green, Lowndes High School assistant principal, in a statement, “We are aware of a social media video involving two students and a Pride flag.”

“As soon as the Lowndes High School administration was aware, the matter was investigated, they ensured that the victim was not hurt and addressed the other student following the appropriate consequence outlined in the Student Code of Conduct.”

You murder someone on a dare, it's still a crime. He stole someone's property, pulled them down with enough force to hit the ground, and tossed it in the trash. Also, if that person dared them because it's a Pride flag, than yes, it is a hate crime.

Instead of focusing on the bully or the laughing girl in the foreground, I want there to be more focus on the student in yellow who is brave and strong and a true friend. They reacted so quickly!

I lived in Valdosta for eight years. I stopped eating with my co-workers when they told me a story about a distant cousin who developed cancer, and obviously that was a punishment for their gay lifestyle. Everyone around the table nodded, I got up and left.

I don’t understand how a rainbow flag can cause that much anger in someone.