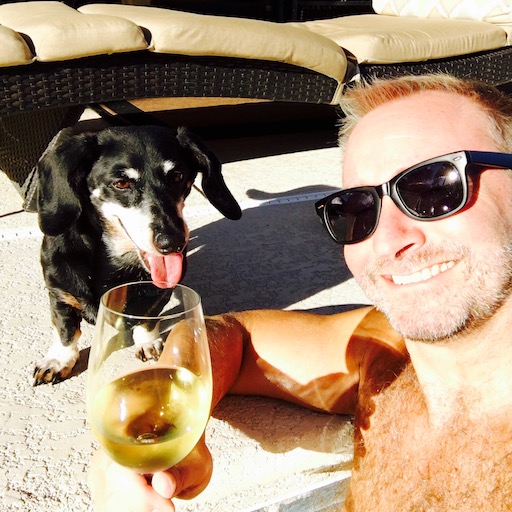 With heavy hearts, Michael and I want to share that Bruno the wonder dog passed away yesterday afternoon.

In the 24 hours since his crossing the rainbow bridge, we’ve quietly begun to process this seismic shift in our lives. Bruno was “the” alpha in the house. Every moment was about his enormous, funny, charming and confident personality.

I’ve said for years that Bruno was my best friend, and I mean that. He loved me; he made me feel special; we shared a connection that cannot be parsed. It was it’s own unique relationship.

The phrase “indomitable spirit” was surely crafted with The Brun in mind. Few dogs spend their 15 years smiling and filling a house with so much love as Bruno did even in the face of so many adversities.

At the age of 5, he ruptured a disc in his back and was completely paralyzed unable to walk at all. After two back surgeries, months of Michael and I and Bruno doing physical therapy in the bath tub; a determined look fixed in his always expressive eyes; and eventually moving to water therapy in the pool, incredibly he regained about 70% of his back legs.

There was surgery to repair an issue with his bladder.

There was the scratched cornea which led to the cone of shame which he hated. But weeks of the cone and five different eye drops multiple times a day, he healed again.

The past year he’s been coping with the onset of Cushings Disease, an autoimmune condition.

None of this fazed The Brun. Truly, he was Bruno the wonder dog.

Without too many details, Monday night he passed out in front of us in obvious distress. After minutes of mouth to mouth resuscitation he came back. He was shaken, but we stayed up with him thinking he would, like everything else, shake it off. He spent the night sitting up afraid to lie down. His breathing was measured but at least he was breathing.

After about 7 hours of watching him through the night we took him to his vet. During the drive to the vet’s office, he had another “attack” and almost passed out in the car again.

The doctors were able to ascertain he had developed serious heart disease which kept him from getting enough oxygen in his lungs. We were told with treatment and drugs he could get somewhat better, but it was likely he would have more attacks, and a very rough road ahead for him – and he would never be 100% again in terms of breathing.

We’d never seen fear in Bruno’s eyes. Bruno was a champion; the quarterback under pressure who never blinked.

He could see us but it was clear his focus was on breathing. We knew that his last months couldn’t be this. This was not how Bruno lived his life.

We’re thankful we had the information to make that terrible decision that no one ever wants to make. He was calm; he knew we were there in his last minutes.

We share this as so many people knew Bruno, and so many had come to know him via The Randy Report.

We know he will always be a part of us, that our memories are forever. Right now it’s just the void, the sense of someone missing, the lights are dimmer, everything seems to be less colorful. Life feels less.

But he has crossed the rainbow bridge and he’s running so fast again, jumping impossibly high, outracing the big dogs and playing with his family Sabrina, Bandit and Olivia (and so many new friends).

We’ll be fine. Tyler and Bear (Bruno’s pups) are still here at the age of 14 and clearly sense the change. They’re being very sensitive to us.

We felt we needed to share this out of respect for the huge impact that Bruno made in our lives.

We weren’t looking for another family member when Bruno came to us, but we were found.

And everything was better because of him.