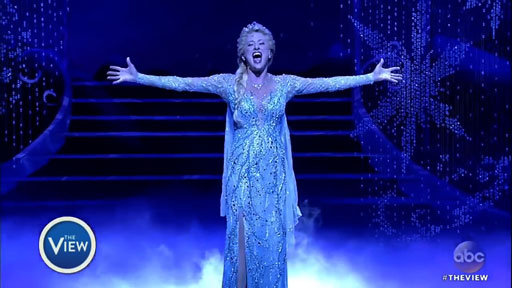 Whoopi Goldberg surprises The View‘s audience with a sneak peek of Frozen on Broadway — and star Caissie Levy’s performance of ‘Let It Go’ makes a television debut!

Seriously, the stage magic and costume change are spectacular.

Back in the day, I was told legendary producer David Merrick wouldn’t allow the “Hello, Dolly!” number to be performed on television because he felt like it was giving the big moment away.

I think there can be some wisdom there. Although, to be fair, shows like Wicked have performed their “big” moments on the Tony Awards for years, so…

In any case, Caissie Levy sings the hell out of the incredibly difficult song, and that costume change… wow.