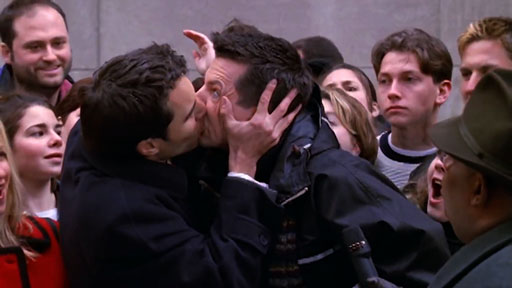 “You are exactly who you are supposed to be.”

You could say that’s one of the ineffable messages of Pride Month.

And underscoring yet again the impact Will & Grace has had on LGBTs and allies alike, this one minute video gets to the center of what has made the show such an enduring success.

The newly-released mash-up from the iconic sitcom in honor of Pride Month reminds us why the Will & Grace reboot been an amazing revival for NBC and the LGBT community.

Take, for example, the clip from the latest season between Will and guest star Ben Platt:

Will: “My coming out was pretty typical – my mom cried, my dad drank…”

Ben: “I told my parents when I was 8. They both threw me a coming out party on the same weekend.”

Will: “That’s not a coming out story. How’s James Franco supposed to win an Oscar playing that???”

While it gets a good laugh, the brief scene combines comedy and light with a subject many experienced as painful.

The quick video tribute offers coming out moments from Will and Jack, as well as the infamous “television kiss” between the two dashing urbanites.

We’re also treated to moments of pride by parents on the show, something most of America had never seen before W&G.

And why? Because as Jack tells us, “That’s what we do in the community – we ‘gay it forward.’”

Because Pride Month isn’t just about a party, or history, or a slogan.

“The minute you forget what we went through to get here, is the minute it could all be taken away.”