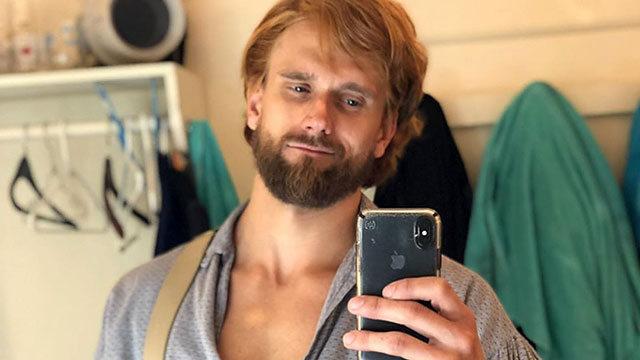 Adam Perry, who’s appeared in numerous Broadway shows (Frozen, Rocky, Nice Work If You Can Get It, Anything Goes, Promises, Promises, A Chorus Line, Wicked) shared his ongoing journey with the coronavirus having lived with symptoms now for over 100 days.

For months now, the myth of the coronavirus has been that it “only affects the elderly.”

But Perry, who has been in peak physical condition for years thanks to dancing on Broadway and hitting the gym regularly, says his experience with COVID-19 has been “terrifying.”

“There is nothing like the feeling of not being able to breathe,” he told CNN’s Kate Bolduan on Erin Burnett OutFront.

A Broadway actor says he’s still feeling the effects of Covid-19 after contracting the virus in March.

“There’s nothing like the feeling of not being able to breathe. … I would feel better for a few days, and then it would come and smack me again.” https://t.co/HOEHHuGJdy pic.twitter.com/WgbobpGh4b

Since testing positive for the virus on March 17, Perry says his ongoing symptoms start with a cough and then develop into tightness in his chest.

“I would feel better for a few days and then it would just come and smack me again,” Perry said. “I had two days of symptoms and then felt like a million bucks for three days. So I thought I was off the hook, thought I beat it, but then it came back with a vengeance.”

A serious concern for Perry today is struggling with his ‘new normal.’

“I have been doing eight shows a week for 15 to 20 years,” he said. “Now the capacity is not the same. I am just praying daily that it will get back to normal and I will be able to do things again.”

The 39-year-old actor shared on his Facebook page that watching the news of new COVID-19 cases surging across the country left him in tears.

“I cried watching the news tonight,” wrote Perry. “Cases are spiking. The president makes jokes about coronavirus. People shame others for wearing masks. The country is making it a partisan issue.”

Perry urged viewers to “come together, wear a mask, socially distance for as long as we can until there’s a vaccine because this thing has an infinite variable of outcomes for people.” He added that, in his view, there’s “a short term, long term, and ‘we just don’t know,’ so it’s just really important that people take care of each other.”

He added, “I just really don’t want other people to have to experience what I experienced.”

Watch Perry’s recent appearance on CNN above along with just a few posts from his Instagram account showing how fit the Broadway veteran has stayed over the years.

Jan 1st. Is it summer yet? 🙄 🌊photography by @lapidustudio

Natural tho 🌿 Photo by @kevinmcdnyc 📷