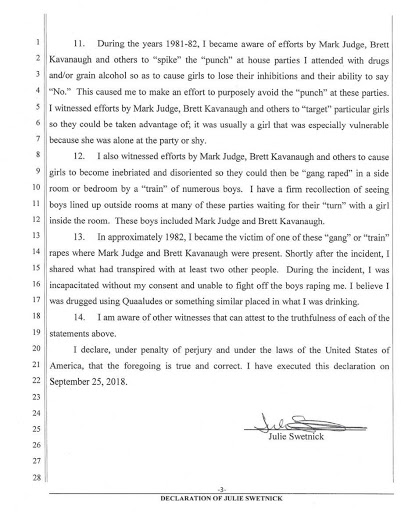 CNN producer Javi Morgado has shared on Facebook the deposition of Julie Swetnick, who has come forward accusing Supreme Court nominee Brett Kavanaugh of being involved in ‘gang rapes’ during the 1980s.

She alleges she witnessed Kavanaugh and his bestie Mark Judge ‘spike’ the punch at parties with alcohol and drugs to help drug girls and lower their inhibitions. She says she

“I have a firm recollection of seeing boys lined up outside rooms at many of these parties waiting for their ‘turn’ with a girl inside the room. These boys included Mark Judge and Brett Kavanaugh,” Swetnick said.

She not only saw the behavior at house parties during that time, but became a victim of one of those ‘gang rapes.’ She alleges Kavanaugh and Mark Judge were involved.

According to her signed affidavit, she has witnesses to support her allegations.

Swetnick is the client Michael Avenatti has been referring to in his tweets of late.

Below is my correspondence to Mr. Davis of moments ago, together with a sworn declaration from my client. We demand an immediate FBI investigation into the allegations. Under no circumstances should Brett Kavanaugh be confirmed absent a full and complete investigation. pic.twitter.com/QHbHBbbfbE

Swetnick is no slacker. She’s held security clearances with the federal government in the Justice Department, State Department, Homeland Security and more.

In a statement released by the White House, Kavanaugh denied the new allegations:

“This is ridiculous and from the Twilight Zone. I don’t know who this is and this never happened.”

See the sworn affidavit below. Click on the images below to enlarge. 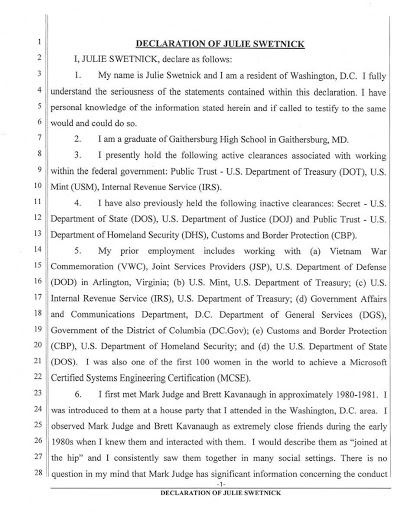 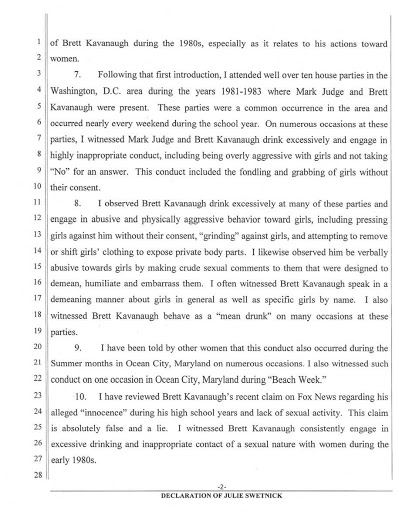