Of course, we KNEW Saturday Night Live was going to wade into the swirling scandal this is George Santos. And Bowen Yang was the right man for the mission.

Yang threw down as America’s most truth-challenged congressman in not one but two segments on SNL last night.

In the show’s cold open, Yang/Santos beamed in from the Super Bowl as the newest member of the Fox Sports team: “Heisman Trophy winner (at the University of College), more championships than Tom Brady – congressman George Santos!”

James Austin Johnson as NFL on Fox commentator Jimmie Johnson: “Congrats on an amazing career. I didn’t even know you played football, but I’m seeing here that you were the first player to lead the league in passing and rushing?”

Yang/Santos: “That’s correct. I’m sort of the real Bo Jackson, and I’m proud to be the first African American quarterback to ever dunk a football.”

Just one minute after “Santos'” report from the field, Kitara Ravache (Santos’ alleged drag alias) made a special appearance as well with her own astonishing stats: “Deathdrops (26), Duck walks (19), Wigs snatched (infinity), plus the award for ‘tightest tuck.’ 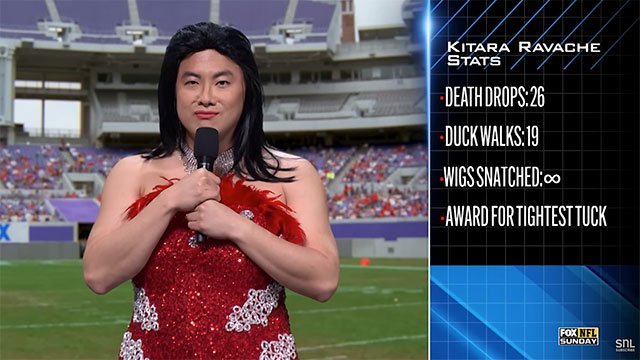 Yang/Santos returned later in the show for the Weekend Update: