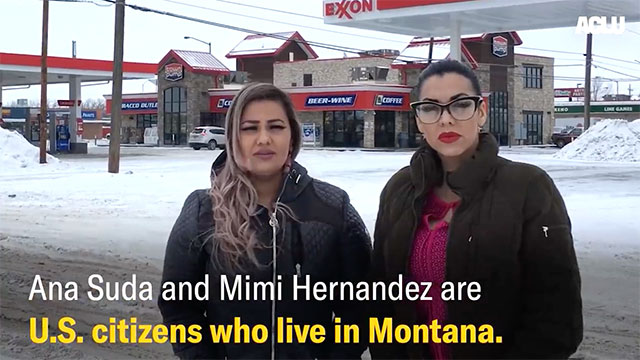 Two American women who were detained by a U.S. Customs and Border Protection agent for speaking Spanish in a convenience store in Montana have reportedly agreed to a settlement after suing the agency.

Martha “Mimi” Hernandez and Ana Suda and were buying groceries in a store in the town of Havre on May 16, 2018, when CBP Agent Paul O’Neal stopped them and asked for their IDs. He told the pair (on video) that he was stopping them because he overheard them “speaking Spanish which is very unheard of ‘up here.'”

USA Today reports that during the lawsuit, text messages were found on O’Neill’s phone that contained derogatory and racist language.

According to the ACLU, the lawsuit also found O’Neill belonged to a secret Facebook group called the “I’m 10-15,” where CBP agents and former agents shared ugly comments and joked about the deaths of migrants. The group has since been disbanded.

A video statement obtained by the ACLU showed a CBP supervisor admitting that his agents routinely viewed people speaking Spanish with suspicion in Havre, which is majority white but has a growing Latino population.

“[Havre] is a small place,” the CBP supervisor said on the video. “And we have a lot of agents here, and nobody really has much to do… I was sitting at the mall off duty with my family. I’m sitting there at the restaurant, I look up it’s — there’s two Mexicans. Maybe I should call about this.”

The amount of the settlement has not been disclosed. Hernandez and Suda eventually moved away from Havre after facing backlash for speaking out.