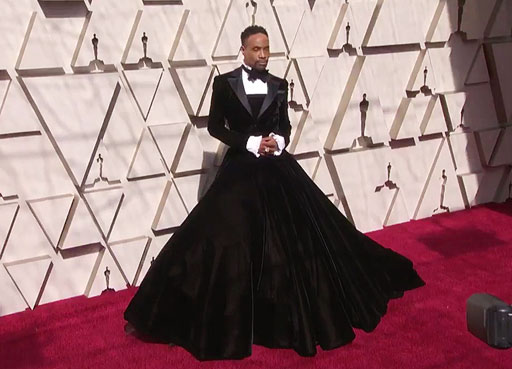 Before the Academy Awards even started, Pose star Billy Porter has won the red carpet.

Anddddd flip!! @theebillyporter at the #oscars in Siriano and what an honor it was to create this moment! @TheAcademy pic.twitter.com/cSZR9D5NA3

When Vogue is talking about you, you know you’ve arrived. Porter was trending on Twitter for well over an hour thanks to his fashion sense.

At the #Oscars, @PoseOnFX star @theebillyporter defied fashion norms by stepping out onto the red carpet in an unapologetically fabulous gown. https://t.co/yXvumMezDg

Porter has rocked the red carpet throughout this awards season.

At the Golden Globes, Porter donned a tailored suit and pink cape. He showed up at the American Film Institute Luncheon sporting a goldenrod gown paired with a matching blazer and head scarf.

“One of the things I’ve realized is that I’ve always had a gender-fluid sensibility with clothes, and it was so squashed by homophobia,” he shared with the New York Times earlier this year.

“Show business likes to masquerade as being inclusive and diverse,” said Porter, criticizing some fashion house’s traditionalism. “When we ask the houses for male and female clothes, we get the response, ‘We don’t think you should be wearing that.’”

“I find the younger talent to be much more open to experimentation and gender fluidity,” said the Tony Award winner to WWD. “I’m interested in connecting with designers who I can collaborate with.”

When you come to the Oscars, you must dress up. Thanks @CSiriano for creating this custom couture masterpiece. @OscarHeymanBros you have outdone yourselves with your iconic jewels. Style by @sammyratelle Grooming by Anna Bernabe. @TheAcademy #AcademyAwards2019 #oscars #oscars2019 pic.twitter.com/IpTG2OK20x

Sir, you cannot possibly use such a pedestrian term as “dress up” to describe all of the fabulousness you are currently rocking.

Billy Porter is the first Ive seen come down the red carpet (and may likely remain the best?) pic.twitter.com/LWvQrUXWTj

I wish I had a Billy Porter when I was a kid. You don't need to want to wear a dress to be inspired by someone who is unafraid to be themselves. https://t.co/KEfNxf6viK— Yashar Ali 🐘 (@yashar) February 24, 2019

2. And to all the folks saying Billy Porter is just looking for attention…um yeah. He's on the #Oscars red carpet. He didn't show up to his grocery store in that dress.— Yashar Ali 🐘 (@yashar) February 24, 2019