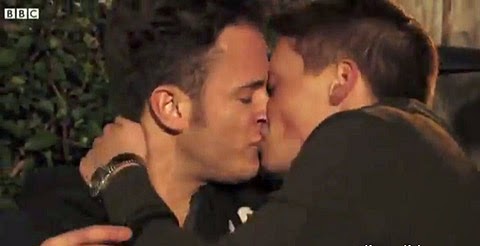 This kiss on the British soap Eastenders between characters Johnny Carter and Gary Pennant (Sam Strike and Gary Lucy) is causing a bit of controversy after dozens aired homophobic reactions on Twitter following the episode.

Although the BBC says it has received very few complaints through official channels to the kiss between Eastenders characters Johnny Carter and Gary Pennant (Sam Strike and Gary Lucy), Twitter reactions have taken a disappointingly homophobic tone to the romantic interlude on a recent episode of the British soap opera.

Some called for killing the “faggots” and complaining that the show was filled with them.