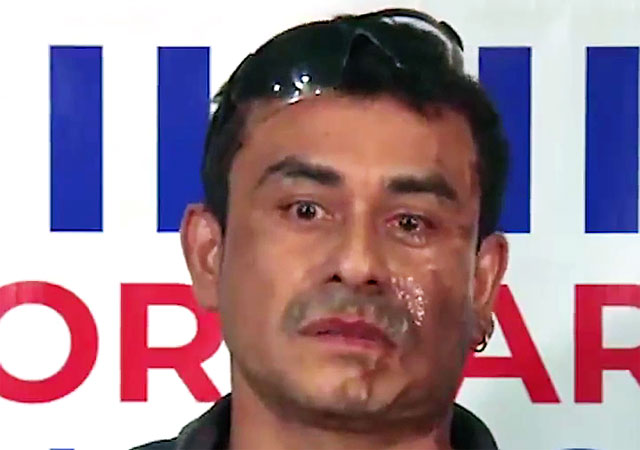 Milwaukee police have made an arrest after a man was attacked and burned with acid in what officials say is a hate crime.

Mahud Villalaz suffered second-degree burns to his face after he was confronted by a man he says accused him of being in the country illegally. Villalaz, a U.S. citizen and Latino, says the man approached him in front of a restaurant Friday night, told him he didn’t belong in the country and threw acid from a container on him.

Surveillance video shows Villalaz stumbling away from the suspect, who police say is white.

This “type of racial verbal attack and now physical attack is condoned in the highest level of government in our country,” Milwaukee Mayor Tom Barrett told reporters Monday, according to Wisconsin Public Radio. “This anger towards people of other countries is being fed by our president — and by his followers. What we saw over the weekend is a manifestation of that anger.”

“Everybody knows what’s happening,” he continued. “It’s because the president’s talking about it on a daily basis that people feel they have a license to go after Hispanic people.”

The Milwaukee Journal-Sentinel reports Clifton A. Blackwell, 61, was arrested Saturday, hours after the Friday night confrontation that left Villalaz with second-degree burns on his face.

Blackwell’s mother told the Journal-Sentinal her son has been under the care of the Department of Veterans Affairs in Milwaukee for post-traumatic stress disorder stemming from earlier service in the Marine Corps.

That statement seems to justify Blackwell’s violence by calling him a veteran. How does being a veteran explain carrying a bottle of battery acid with you?

And before people come after me, I come from a military family. My dad was a major in the Air Force serving in two wars. I have nothing against veterans, just racists.

A Milwaukee man was left with second-degree burns after someone threw battery acid in his face and accused him of being in the country illegally. https://t.co/JfLJNOCIhB pic.twitter.com/fxgCoFhEFb