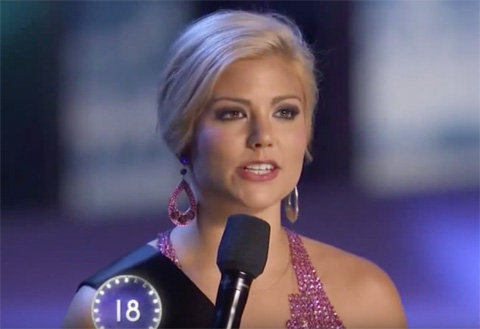 I haven’t watched the Miss America pageant in 32 years until last night (see my posts about the return of Vanessa Williams).

My, how the depth and tone of the Questions segment has changed. Last night, we saw interesting questions about Kentucky County Clerk Kim Davis, Planned Parenthood and even The Donald.

And smart answers from the ladies. Check this out from the Advocate:

“[Issuing marriage licenses] absolutely does not violate her religious freedom,” she said. “That is her job she was voted into doing. That law is a federal law throughout the rest of the country. So, yes, she did violate the law there.”

Hannah Robison, Miss Tennessee, was asked about Republican threats to shut down the government if their attempts to ban federal funding for Planned Parenthood are unsuccessful. No federal funds are used to support abortions.

Asked about Donald Trump’s amazing rise to the top of the Republican presidential field, Miss Alabama, Meg McGuffin, said the GOP should be “absolutely terrified” of the business mogul’s reign at the top of the polls.

“I think Donald Trump is an entertainer, and I think he says what’s on a lot of peoples’ minds,” she told judge Taya Kyle, the widow of Navy SEAL Chris Kyle. “But I think the Republican Party should be absolutely terrified of all the attention that he is taking from incredible candidates like Jeb Bush and Chris Christie who could absolutely do the job of president of the United States.”

You can watch the Q&As below: