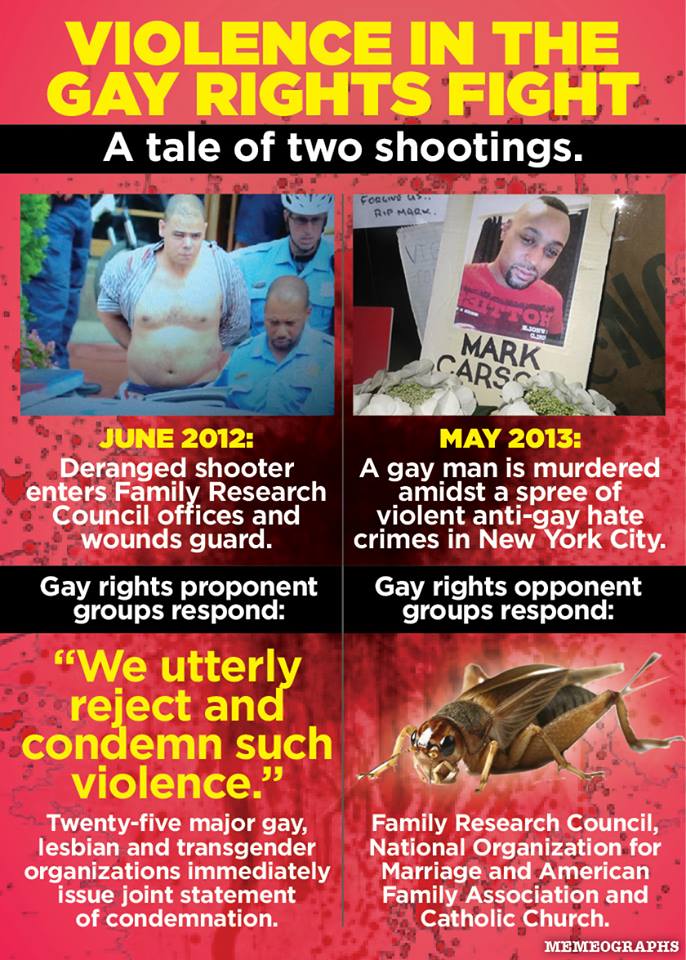 After last year’s shooting at Family Research Council, many prominent voices in the LGBT community condemned the senseless attack.

However, I have been pondering the deafening silence of the Tony Perkins’ (Family Research Council) and Brian Browns’ (National Organization for Marriage) of the world regarding the multiple violent attacks on the gay community in NYC this month.

UPDATE: Interestingly, the following statement appeared on the NOM Blog this afternoon, hours after my original post above.

“We condemn in the strongest possible way the murder of a gay man in New York by a killer who apparently hurled anti-gay insults at him moments before the killing. This senseless act cannot be condoned in America or anywhere, and we urge that the perpetrator be prosecuted to the fullest extent of the law. Our heart goes out to the family of the victim, and we hold them in our prayers. While this killing appears to have no connection to the current debate about redefining marriage, there is no room for violence toward any American — whether they support traditional marriage or not. No person should be subjected to violence because they are gay or lesbian or because they believe that marriage is the union of one man and one woman. There is no place for violence, period.” – Brian Brown

UPDATE 2: This statement is now on the Family Research Council website.

Family Research Council President Tony Perkins released the following statement regarding the charges filed in the Mark Carson murder case in New York City: “We denounce any and all acts of unprovoked violence. No American should be the target of violence – period. We hope and trust that justice will be served in that the perpetrator of this senseless act of violence will be prosecuted to the fullest extent of the law,” Perkins said.