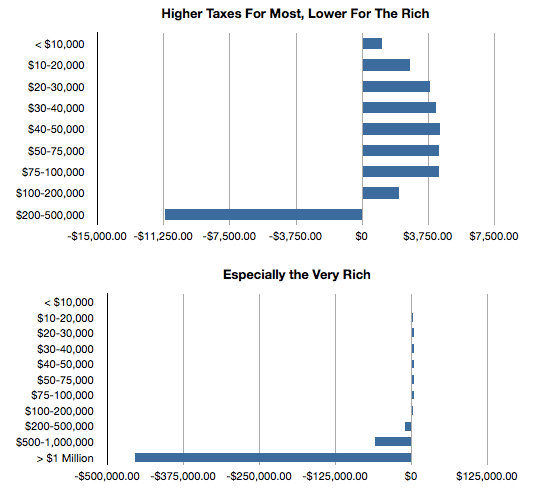 As Herman Cain has surged in the polls, his 9-9-9 plan is getting more and more scrutiny, and it’s not working out the way Mr. Cain says it will.  Many accounting firms have taken on the job of analyzing the plan, and in each approach – other than Mr. Cain’s – it works out as a tax increase for lower and middle income Americans.

The Tax Policy Center, for example, has a new analysis out of the distributive consequences of Herman Cain’s 9-9-9 tax plan. The Tax Policy Center models 9-9-9 as catchy new slogan for a de facto national consumption tax, and consequently constitutes a tax increase on most Americans but a tax cut for high income people who engage in a lot of savings and investment.

As you can see, you actually need two charts to illustrate this properly because the magnitude of the tax change for the highest income segments is very large. But basically you’re talking about a nice tax cut for the $200k-$500k crowd and a really big tax cut for people who earn more than that, plus mid-sized tax hikes for everyone else.
(via ThinkProgress)