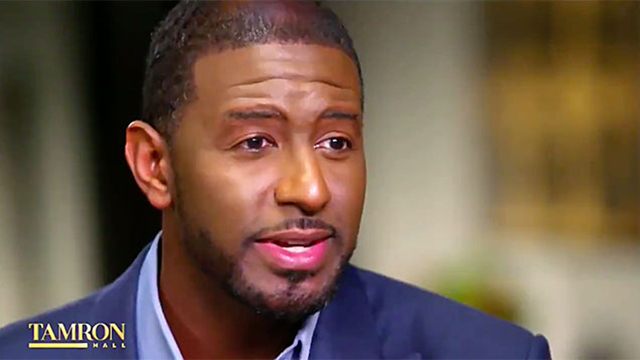 Andrew Gillum, former mayor of Tallahassee and the first Black nominee for Florida governor, came out as bisexual today on The Tamron Hall Show.

“I don’t identify as gay,” Gillum said, “but I do identify as bisexual. And that is something I have never shared publicly before.”

You may recall Gillum was found naked and drunk in a hotel in Miami Beach in March 2020. An associate, Travis Dyson, was treated for an apparent drug overdose at the time.

Gillum denied he went to hotel room to take part in any kind of sexual situation. When it was reported the police had apparently confiscated what was believed to be crystal meth, Gillum said he’d never used the drug. He checked into a rehab facility shortly thereafter.

She shared that she feels her husband’s sexuality should not be part of the public discourse because of widespread misconceptions about bisexuality.

“So many people just don’t understand bisexuality,” his wife said. “All I care about is what’s between us and what agreement we make.”

Gillum came up short in the 2018 race for governor of Florida to Republican Ron DeSantis.

A longtime supporter of LGBTQ rights and protections, Gillum is a former mayor of Tallahassee, the capital city of Florida.