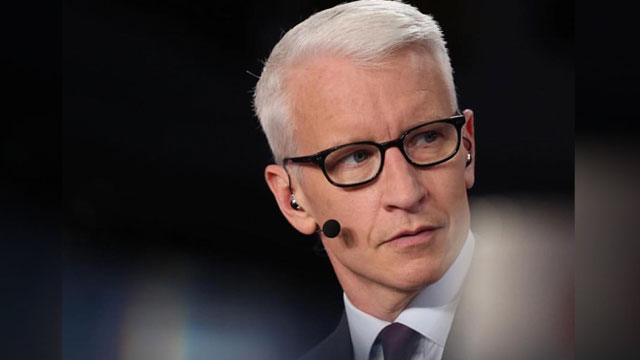 Out CNN anchor Anderson Cooper Zoomed into Howard Sterns’ radio show this week to chat on the news of Cooper’s new son, Wyatt, who was born on April 27.

Along with the ‘proud dad’ announcement, Cooper has publicly shared that his ex-boyfriend, Benjamin Maisani, will co-parent Wyatt.

Since the couple broke up over two years ago, the news surprised some folks.

So, Howard went right to it asking: “Don’t you want a clean break from this guy?”

Cooper’s response was both moving and disarmingly candid.

“I don’t really have a family, so my friends become my family,” said the 52-year-old journalist. “And this is somebody that I was involved with for 10 years. He’s a great guy.”

“We didn’t work out as a couple, but when I was a little kid, it was just my mom and my brother,” he continued. “But it was my mom and she was not the most parental person.”

Cooper’s mother was acclaimed artist, fashion designer and socialite Gloria Vanderbilt, who passed away last summer at the age of 95. His father, Wyatt Emory Cooper, died in 1978 when Anderson was just 10-years-old.

“I wish some adult, after my dad died, had stepped in, and just been like, you know what? I’ll take you to a ball game, or let’s go out to lunch every now and then, and let’s just talk,” he shared. “No one ever did that.”

“And so I thought, if something happens to me – or even if something doesn’t happen to me –  if more people love my son and are in his life, I’m all for that,” he said. “My ex is a great guy and it’s good to have two parents if you can.”

Considering the two-parent status, Sterns asked, “Are you both going to be ‘dad?’”

“He’s already speaking French to him, I have no idea what he’s saying,” he added before joking, “He could be turning the kid against me, I don’t know.”

I’ll say I completely understand Anderson’s thinking, and he knows he can trust Benjamin. Good on him.

I want to share with you some joyful news. On Monday, I became a father. This is Wyatt Cooper. He is three days old. He is named after my father, who died when I was ten. I hope I can be as good a dad as he was. My son’s middle name is Morgan. It’s a family name on my mom’s side. I know my mom and dad liked the name morgan because I recently found a list they made 52 years ago when they were trying to think of names for me. Wyatt Morgan Cooper. My son. He was 7.2 lbs at birth, and he is sweet, and soft, and healthy and I am beyond happy. As a gay kid, I never thought it would be possible to have a child, and I’m grateful for all those who have paved the way, and for the doctors and nurses and everyone involved in my son’s birth. Most of all, I am grateful to a remarkable surrogate who carried Wyatt, and watched over him lovingly, and tenderly, and gave birth to him. It is an extraordinary blessing – what she, and all surrogates give to families who cant have children. My surrogate has a beautiful family of her own, a wonderfully supportive husband, and kids, and I am incredibly thankful for all the support they have given Wyatt and me. My family is blessed to have this family in our lives I do wish my mom and dad and my brother, Carter, were alive to meet Wyatt, but I like to believe they can see him. I imagine them all together, arms around each other, smiling and laughing, happy to know that their love is alive in me and in Wyatt, and that our family continues.