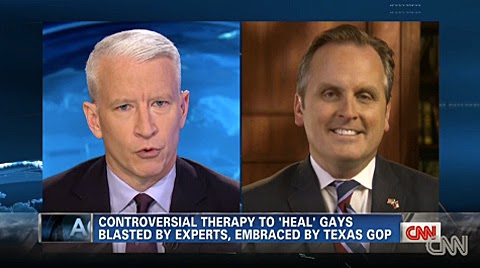 I recently reported on the latest plank added to the Texas Republican Party platform endorsing “ex-gay” therapy for gays and lesbians who are “seeking healing and wholeness from their homosexual lifestyle.” The same therapy has been denounced and called harmful by the American Psychological Association.

Anderson Cooper spoke to Texas state Rep. Bryan Hughes about the party’s decision to endorse the therapy, and the fact that all major medical organizations denounce the practice. Hughes tries to introduce the “there are opinions on both sides” argument and Cooper stops him in his tracks:

Hughes tried to soften his rhetoric a bit:

“No one is saying that God doesn’t love people as they are. There’s nothiing in the platform about that. No one is trying to take that position. Every one of us makes mistakes, makes decisions we’re not proud of. God loves each one of us, and he offers us a way for us to deal with sin and bad choices. But I do strongly disagree with what he said about God not loving people.”

“The fact that you view being gay, or you characterize it as a ‘mistake,’ or something that should be changed really kind of maybe says more about your position than what your words actually say.”

You can watch the interview below. Good for Anderson for having facts at hand and calling out the lies by Hughes.