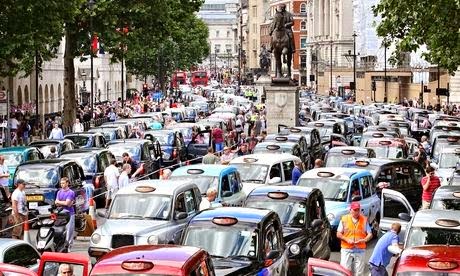 The taxi drivers say Uber drivers are unregulated and threaten their livelihood.

In London, Trafalgar Square and Whitehall were jammed from the start of the planned “go slow” at 2pm, as thousands of black cabs gathered honking their horns, bringing total gridlock to the centre of the capital, while supporters waved banners and started occasionally chanting: “Boris, out!”

A spokeswoman for Uber, the US start-up which links minicab drivers to passengers via a GPS-based smartphone app, said the protests had boosted new users in London by 850%, as people tried to cope with the gridlock.

The response from Uber? Apparently it only helped the taxi app. Uber’s UK and Ireland general manager Jo Bertram said, “Today we’re seeing an 850 per cent increase in sign-ups compared to last Wednesday. The results are clear: London wants Uber in a big way.”

I’ve actually never used Uber. Husband Michael has used the app in San Francisco, Miami and NYC, and loves it. Instead of looking for a cab up and down the block, you hit the app – a driver connects with you – and he’s there in a couple of minutes.

I saw a Huffington Post article a few weeks ago showing that Uber drivers, at least in major cities like San Francisco and NYC, make more than their taxi driving counterparts.