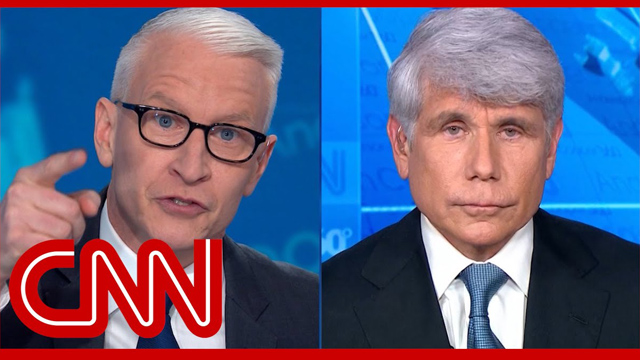 This is seriously must-see TV.

CNN’s Anderson Cooper spars with former Illinois Gov. Rod Blagojevich, who calls himself a “political prisoner” days after being pardoned by President Trump.

Normally, I try and condense the news here on The Randy Report, so I don’t post 11-minute videos very often. But this is quite something.

Blagojevich’s sentence was commuted earlier this week by Trump after the Democrat (and former “Celebrity Apprentice” contestant) had served eight years of a 14-year sentence for pay-for-play crimes. You may recall the former governor was caught on tape admitting he planned to ‘sell’ President-elect Barack Obama’s U.S. Senate seat to the highest bidder.

At one point in last night’s interview, Blagojevich states he wants to work on reforming the criminal justice system. Cooper found that to be laughable.

“It’s a little ironic, and frankly a little sad and pathetic and hypocritical, you talking about getting a commutation of a sentence, which is within the president’s right, but you ignored a whole hell of a lot of other people who were hoping you might give them clemency when you actually mattered,” said Cooper.

At the end of the fiery interview, here’s Cooper’s summation:

“Look, I have no problem with you getting out. The president can commute whoever he wants. I just think you’re besmirching prosecutors who actually are no longer in government.

“But prosecutors are important in our system and you are going after the very basis of our justice system. Part of the thing is you got out – you do have an obligation to at least admit what you did wrong and you refuse to do that and you’re creating a whole new alternate universe of facts.

“And that may be big in politics today, but it’s still frankly just bullshit.”