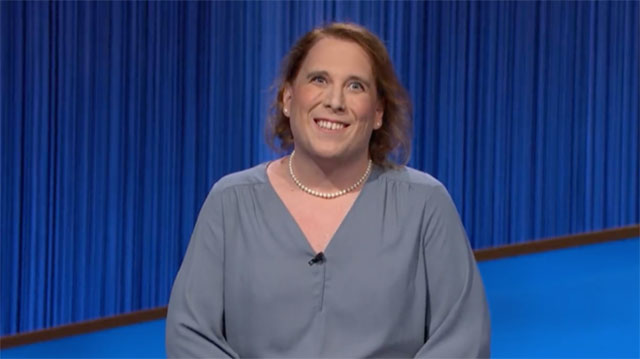 Amy Schneider is now tied with James Holzhauer at 32 games and #3 on the all-time consecutive wins list! pic.twitter.com/UdeUKXEHqt

Schneider took home the win with $32,800 on Thursday night. She was far ahead of her competition for most of the game, especially after finding — and correctly answering — all three of the Daily Double questions.

The first transgender “Jeopardy!” contestant to qualify for the Tournament of Champions, Schneider has captivated audiences with her gameplay.

Since her first game on November 17, she has won $1,101,600 and is the highest earning female contestant in “Jeopardy!” history.

Schneider is six games away from tying Matt Ammodio’s second-place streak of 38 games. But there’s a long road ahead before she catches Ken Jennings’ records of $2,520,700 over 74 games.

1/ When Amy Schneider was in 8th grade, her class voted her most likely to compete on Jeopardy!

Last night, she won her 32nd straight game. To keep her cool, she’s taken to humming “Lose Yourself” before every game. https://t.co/Yul5XK1AE8