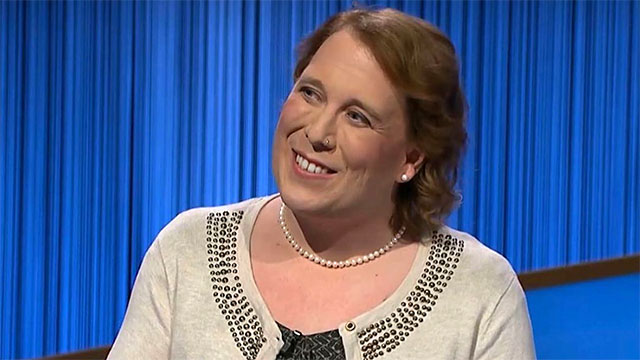 Amy Schneider has set a new Jeopardy record for the most consecutive games won by a woman and surpassed Larissa Kelly as the highest-earning female contestant in Jeopardy history.

Well, it was fun to hold a Jeopardy record for a few years…but it's been even more fun to watch @Jeopardamy set new standards for excellence, on the show and off. Congratulations to Amy on becoming the woman with the highest overall earnings in the show's history! 📿👑

At 23 straight victories, the transgender engineering manager from California is now in fourth place for the all-time streak.

“In my highest of high hopes, I never dreamed of matching Julia’s streak,” Schneider wrote on Twitter earlier this week. “It’s hard to say how I felt: proud, dazed, happy, numb, all those things.”

Twenty wins! It happened months ago for me, and I’m still trying to take it in. In my highest of high hopes, I never dreamed of matching Julia’s streak. It’s hard to say how I felt: proud, dazed, happy, numb, all those things. But along with all that, I was also ready for lunch!

In addition to setting new records for female contestants, Schneider now has the fourth-longest run of consecutive wins for any Jeopardy player.

The all-time record still belongs to Ken Jennings, now a Jeopardy cohost, with 74.

Schneider is the first openly transgender Jeopardy contestant to qualify for the show’s “Tournament of Champions.”

She acknowledged her gender identity by wearing a pin with the trans pride flag on the show, a gesture she modeled after Kate Freeman — who in December 2020 became the first openly transgender woman to win a game.