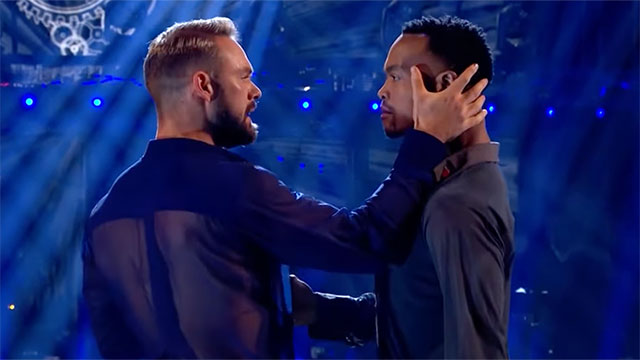 The first all-male team on the uber-popular UK competition Strictly Come Dancing brought serious heat and heart to their oh-so-romantic rumba this weekend.

John Whaite, who took the trophy on Season 3 of The Great British Bake Off, and professional dancer Johannes Radebe have been impressing the judges and TV audience every week with consistently high marks. Twice they’ve racked up the highest score of the week including one week with a nearly perfect 39 out of 40.

Saturday night the duo stopped hearts with a stunning rumba set to Sting’s “Shape Of My Heart.”

Known as the dance of love, the rumba is the most intimate dance in ballroom and Latin. Would the two out men embrace the necessary sensuality?

“What we’ve done so far have been very masculine, laddy kinds of dances,” Waite told The Mirror prior to the show. “We’ve had bantery dances, pally dances, now it’s time to be romantic.”

“The rumba is the most sensual dance, and we’re not going to shy away from that,” he added. “We’re here to make the point that gay people and same sex couples should be allowed to dance together.”

I’ve been a professional dancer for 40+ years. If you had told me when I was in my teens/20s that we would see a dance of this caliber AND of this level of intimacy danced by two gay men on a mainstream TV series, I wouldn’t have believed you.

Not only is the sensuality of the dance on full display here, but the steps and execution are stunning. Watch the mens’ completely engaged arms and that oh-so-subtle hip work.

Props to Radebe for his consistently top-shelf choreography, and to Waite for more than keeping up. The duo are throwing down with charisma and commitment every single week.

It’s interesting to note that this same week DWTS pro Jenna Johnson, half of the show’s first same-sex team with Jojo Siwa, told Yahoo Entertainment the only dance she didn’t want to do this season was the rumba.

“I didn’t want to do it because it is a dance of love, and it is a very sensual dance that requires a lot of chemistry, and it works really well for a male and a female,” said Jenna. “And I just didn’t know if I would be able to commit to a rumba, or if I would be able to pull it off, honestly, with another female.”

Meanwhile, across the pond, it’s not just the judges who are impressed. Reading through the comments of the YouTube post, the TV audience is buying into Team Gay big time.

• “So many emotions. As soon as the singer started, the tears just came rolling. I just love same gender paring because there ARE NO RULES about leaders and followers and they can just make it the best dance they want it to be and play to both their strengths.

• “I watched this tonight BAWLING my eyes out. As someone with autism, I know how terrifying it is to show the world your true self, but these two are doing just that. From one rainbow/spectrum to another, I am so proud of you both. Well done my darlings.”

• “I was so afraid that they would back off on the choreography of this rumba and I am so freaking happy to see they went for it with a gorgeous, steamy, intimate dance!!! Loved it and hope to see John and Johannes make it to the finals!!!”

• “I’m not usually a fan of the rumba, but this was something else…the connection between John and Johannes, the choreography and music all formed the most beautiful and breathtaking dance. Loved it.”

Earlier this season, I wrote about the show’s gorgeous Bridgerton-inspired same-sex waltz set to a reimagined arrangement of Taylor Swift’s “Lover” and “Love Story.” I still can’t get enough of this…