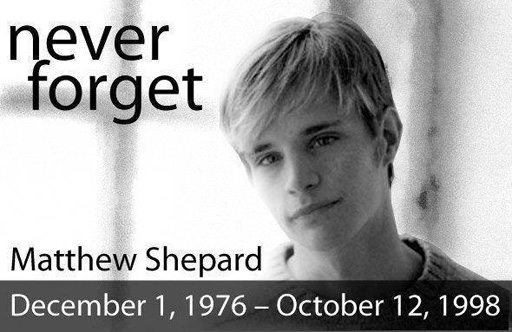 Shepard was attacked and left to die tied to a country fence post because his attackers (currently serving life sentences in prison) decided he was gay, and for that, he deserved to be tortured and left to die.

Aaron is so spot on with his tribute, I asked to post it here.

A Tribute To Matthew Shepard

Seventeen years ago I heard the news on the television about the brutal attack on a young man named Matthew Shepard. He was a 21 year-old bright and sensitive young man, who was a freshman at the University of Wyoming. On October 6th 1998, two young men took Matthew outside of the city limits and proceeded to; stripped him naked, tied him to a fence post with an utility cable, savagely beat him with the end of a .357 Magnum pistol until his skull broke open, tortured him and then just left him there to die, in the darkness of that cold Wyoming autumn evening.

“He was covered with blood, except for where the tears had run down his face.” This is how the police officer who found Matthew described the scene. “He looked more like a more a scarecrow, than a human being. He had been left there, still tied to that wooden cross and left there to die.” His last waking moments spent as a victim of severe ridicule, oppression, rejection, hate and homophobia.

However, Matthew would not die there on that fence post. He would wage to a non-stop fight for almost five (5) days. Hanging on to his life, until his parents were able to make it to his bedside and say their goodbyes…to their only son.

Our little friend, Matthew Shepard, is now dead and were all been left behind to decide how? How will we deal with all of our anger, our grief and our frustrations? We have all stood together in silence at very moving candlelight vigils. We have marched together at protests and memorialize his death. We have even denounced all of the anti-gay rhetoric, the Catholic Church’s horrible response and even those who chose to use Matthew’s death as a way to make money or mobilize voters. Now what do we do?

The great leaders, Mahatma Gandhi and Martin Luther King, continue to call upon us from their graves. They remind us to take seriously the use of force and to be relentless in our pursuit of non-violent resistance. They also remind us, that we cannot begin our own journey until we have learned to also love (and forgive) our own enemies. I don’t exactly know what this now means for the LGBT community, but I am afraid that we may not be a party to a long-term solution… until we ourselves learn to love and forgive sincerely.

So now we must all again decide how we will honor Matthew Shepard’s life? If love doesn’t conquer all of our anger, grief and frustration; if we continue refusing to forgive, we could very well reverse all the gains that Matthew’s death has brought to us and only serve to dishonor his memory in the process. But if we work this out and learn to forgive our enemies; if we take the moral high ground and chose to work relentlessly, confronting the untruths and to end this cycle of anger and violence… the victory in the end will be ours.

WHO WAS MATTHEW SHEPARD?

Matthew is today in death, what he most likely could have never been in life, considering the superficial world that we all live in. I believe strongly in my heart, that Matthew was put on this Earth for that very reason. His death would have to be so hateful and disgusting, that it would shake the entire LGBT community to its very core. My God, how could a death like Matthew’s do anything less than that?

In the past I was stunned to hear (coming from the mouth of another Gay man) when the anniversary of Matthew’s death was being discussed, “Am I suppose to have my heart break for some guy that was in the wrong place, at the wrong time?”

To which I replied, “Matthew Shepard was NOT in the wrong place at the wrong time. He was right where he was supposed to be! He had been lured from that campus bar by two men pretending to be gay. He was driven to a remote area of the east side of Laramie, tied to a split-rail fence, tortured, beaten and pistol-whipped. His head severely fractured by his attackers and all while Matthew was begging for his life. This human being, named Matthew Shepard, was then left alone to dead, still tied with an utility cable to that split-rail fence like an animal”

“Should your heart break for Matthew Shepard?” I said. “If it does not you should question weather you have a heart at all, because Matthew Shepard is dead and you are still alive.”

A VOW FOR MATTHEW

“I will speak out for justice and for freedom, for your life, my life and for the lives of others.

I will call upon my government to equally protect each of its citizens.

I will act when I see injustice around me.

I will seek peace in my life and in all my actions.

I will value my own journey and uniqueness.

I will also value the journey and lives of those who are different from me.

I will remember Matthew Shepard and all those who have been lost.

I will live my life with courage, with love and with hope… as a tribute to their lives.”

*Delivered at Matthew’s funeral, perhaps the best way to remember Matthew is to take this vow!