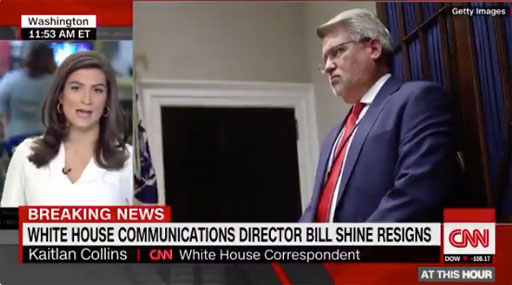 This comes just days after The New Yorker detailed the more-than-close relationship between Fox News and Donald Trump.

Shine worked as a Fox News executive until he was pushed out for his handling of numerous sexual harassment lawsuits at the network.

Shortly after Shine’s resignation was made public Friday, the Trump campaign announced Shine will be joining Trump’s 2020 re-election campaign as a “senior adviser.”

The New York Times‘ Maggie Haberman and Peter Baker write that sources say the campaign assignment may be an effort to help Shine save face.

Shine was the 6th communications director (so far) in the Trump administration.

In related news, Air Force Secretary Heather Wilson also tendered her resignation to take a position in academia. According to reports, Trump had been considering firing Wilson for months due to what he considered slow progress on his proposed ‘Space Force.’