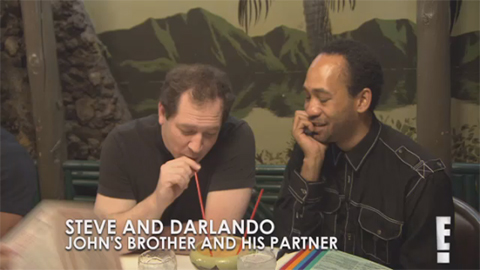 Check out this clip from E!’s reality show Total Divas where viewers learn, quite casually, that WWE Superstar John Cena has a gay brother.

In the episode, Nikki, who has been dating John Cena for several months joins Cena for a rare family gathering. Among the family members are John Cena’s brother Steve and his partner Darlando.

I personally like how matter of fact and comfortable Total Divas – in fact, the whole clan – is in including Steve and Darlando without any fanfare. Just as it should be.  Great family dynamic there.

Related:  TMZ caught up with Cena last month and spoke to him about fellow WWE Superstar Darren Young unexpectedly coming out. Cena is clearly very supportive Young, and speaks of his brother quite openly and directly.