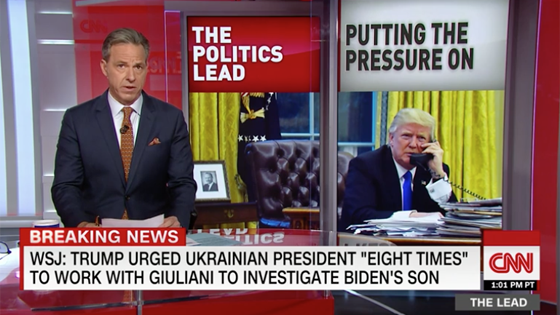 The Wall Street Journal (backed by ultra-conservative and Donald Trump ally Rupert Murdoch) is reporting that in a July phone call Trump “repeatedly pressured the president of Ukraine to investigate Democratic presidential candidate Joe Biden’s son, urging Volodymyr Zelensky about eight times to work with Rudy Giuliani, his personal lawyer, on a probe, according to people familiar with the matter.”

Giuliani had been pressing the Ukraine government to look into any overlap with Mr. Biden’s diplomatic dealings with Ukraine, as well as Hunter Biden’s involvement in a gas company there.

“He told him he should work with him [Giuliani] on Biden and that people in Washington wanted to know” whether the allegations were true or not, one of the people told the Journal.

It’s stunning that, after being investigated for over two years regarding his campaign encouraging Russia to aid in his 2016 election, Trump would openly press another foreign country to become involved in smearing his possible 2020 political opponent.

Last night, during an appearance on CNN, Giuliani denied – then 10 second later admitted – asking the government of Ukraine to look into Joe Biden and his son.

Hillary Clinton tweeted the clip adding, “The president asked a foreign power to help him win an election. Again.”

The president asked a foreign power to help him win an election.

In a Q&A in the Oval Office today, Trump told reporters “it doesn’t matter” what he discussed with the president of Ukraine.

Since the story by the WSJ is behind a paywall, check out the report on the new details from CNN:

Reporter: “Did you discuss Joe Biden with the leader of Ukraine?”

Trump, not denying the story: “It doesn’t matter what I discussed.”pic.twitter.com/nJc0nsXFSc

Joe Biden reacts to reports that President Trump repeatedly pressured Ukraine’s President to investigate Biden’s son: “Not one single credible outlet has given any credibility to (Trump’s) assertion. … The President should start to be President” https://t.co/Vyrfcgkqv1 pic.twitter.com/Qy7gb5mOZT