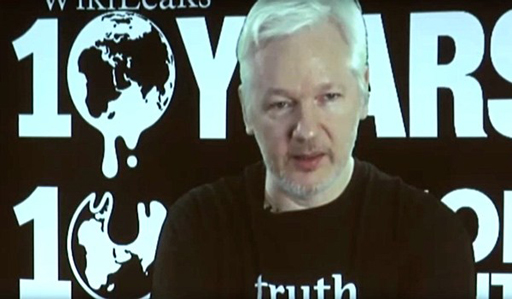 A Tuesday morning WikiLeaks event in Berlin did not produce the “#OctoberSurprise” to derail Democrat Hillary Clinton’s presidential campaign that many Trump followers were hoping for, but Julian Assange said he would release more documents before Election Day.

A Tuesday morning press conference by WikiLeaks, which Clinton antagonists and conspiracy theorists had hoped would spell the beginning of the end of her presidential campaign, turned out to be a celebration-cum-infomercial for the website, which celebrates its 10th anniversary today and is promoting a new book.

Either WikiLeaks and its founder, Julian Assange, never really had the goods on Clinton, or Donald Trump and his supporters just got wickedly trolled.

For months, WikiLeaks has been hinting that it would release damaging documents about Clinton in the home stretch of the presidential campaign. The group had posted embarrassing emails stolen by hackers from the Democratic National Committee in July, leaving the world wondering, what else does Assange have in his hard drive?

Egged on by the apparently unfounded claims of Trump adviser Roger Stone that WikiLeaks had a campaign-ending document dump in store, anticipation reached a fever pitch. According to Google, the top trending question about Trump’s opponent on Monday was “What could WikiLeaks have on Clinton?”

Turns out, probably not much. There was no spectacular release of private emails. No bombshells about the Clinton Foundation or brain tumors. Instead, Assange and some of his WikiLeaks colleagues used the press conference to make a pitch for donations and to note the remarkable quantity of the site’s work—10 million documents published, containing more than 10 billion words, which the group claims is “more secret documents than the rest of the world’s media combined.”

Little Julian is the boy who cried, “emails!” #Wikileaks https://t.co/XHWjtlFLX0

Here’s to you Wikileaks… pic.twitter.com/iKJElOVzoS

This is so glorious! Trump supporters got played big time. Assange is such scum. https://t.co/fgbZJwZfcU