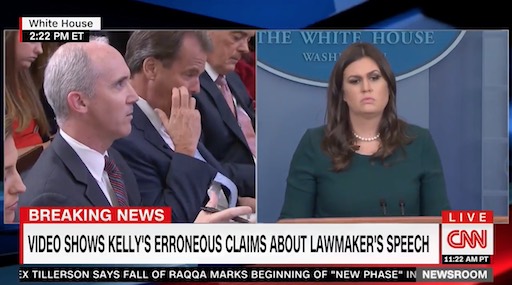 Wilson denied Kelly’s claim saying she wasn’t even in Congress when the funds to build the new FBI building in question were appropriated.

Well, of course, someone was going to find that footage of Wilson’s speech. And nowhere does she take credit for raising the funds to build the new FBI building. She does take credit for having the building named after two FBI agents.

And, she spends a big part of her speech praising the FBI and our law enforcement officials.

I can’t embed the video, but you can see it over on South Florida’s Sun-Sentinel website here.

At the White House press briefing today, members of the press asked press secretary Sarah Huckabee Sanders about the video which showed Kelly was inaccurate with his portrayal of Wilson’s speech.

Sanders told reporters that it is “highly inappropriate” to “go after” a four-star Marine general.

I have tremendous respect for the military but the notion that no one can even question the statements of generals is un-American.

Sanders seems to suggest it’s inappropriate to question Kelly’s story — even though we have a video that indicates his account was false.

Since Ms. Sanders thinks it’s “highly inappropriate” to question or “go after” a military general, I wonder what she thinks of her boss, Donald Trump, “going after” these generals.

General John Allen, who I never met but spoke against me last night, failed badly in his fight against ISIS. His record = BAD #NeverHillary

How can General Martin Dempsey tell Obama that delaying the Syria bombardment will have no consequences? He is no Patton or MacArthur.

I was never a fan of Colin Powell after his weak understanding of weapons of mass destruction in Iraq = disaster. We can do much better!