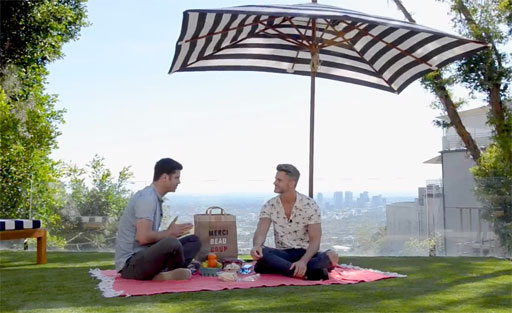 Therapist Matthew Dempsey has a new web series, Cost of Two Sandwiches, where he sits down picnic style to offer his brand of “queer psychotherapeutic guidance” to LGBTQs who are struggling with personal issues like coming out, dating, religion, sex and body image.

In the latest episode, Dempsey chats with Sterling – a gay man who loves being single, but also thinks he wants a serious relationship.

It turns out Sterling was in a great relationship for nearly several years, but five years ago he felt a sexual itch and wanted to scratch it.

He approached his partner at the time about opening up the relationship to accommodate Sterling’s desire to “sexually explore.” The couple went to therapy together, and the boyfriend even agreed to try an open relationship, but assured Sterling, “I will leave.”

So, the two went their separate ways and Sterling has spent the past five years loving being single and being sex positive. In his own words, he’s “been exploring the f**k out” of his sexual self.

But, on some Sundays or Tuesday afternoons, he finds he misses having a partner to “stabilize” him. The problem for Sterling is he’s afraid of losing his sexual freedom.

Dempsey: “What would you say is the thing that scares you the most about being in a relationship?”

Sterling: “That I won’t get to hook up with anybody else.”

Sounds like a “having your cake and eating it, too” kind of situation.

Is this about fear of commitment? Or taking care of sexual needs?

Dempsey brings up a few issues that are central to the issue including compatibility in relationships, coping with our sex drives, and adopting relationships that align with societal views.

Hit play below to see how the chat plays out, then share your thoughts in the comments.

Is Sterling selfish? Or is he just trying to understand himself?