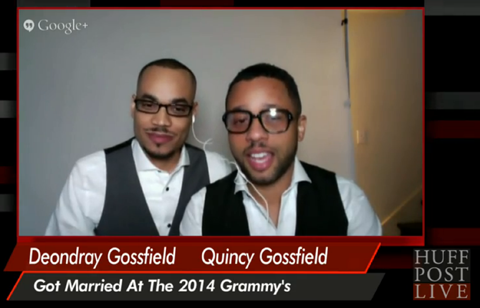 After last night’s Grammy Awards ceremony, during which 33 couples were married on-air, one of the newly-wed couples joined HuffPost Live to share their unforgettable night. Deondray and Quincy Gossfield explained how they were selected for the ceremony, clarified the legality of their union and even dished on a memorable moment they shared with Katy Perry and Paul McCartney.

On keeping the ceremony under wraps:

Quincy: “Oh gosh, it was the worst secret ever because you want to share it with your friends and family. And our family is spread across the country so we had to devise ways to get people to watch the grammy’s without telling them we were getting married. But they knew that we were engaged. It was extremely difficult. We were not allowed to tell.”

On the legality of their marriage:

Deondray: “Yes, [we are officially married]. We went through the entire process… We got married.”

Quincy: “[Queen Latifah] came backstage after the grammy’s and she signed, with the state officials, everybody’s marriage certificate.”

On the most memorable part of the evening:

Quincy: “I tried to look away from [my husband] and I catch eyes with Paul McCartney. And Paul McCartney puts his hand over his heart and he smiles at me and nods his head and I lost it, which is the screengrab that everybody is posting all over the internet, #uglycry.”