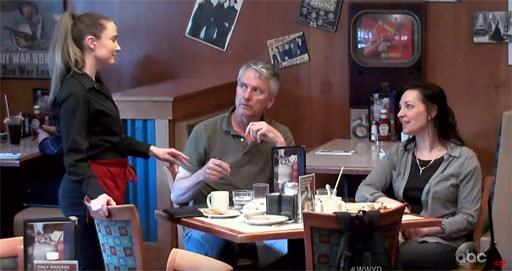 Over the weekend, I wrote about ABC News’ popular series “What Would You Do?” exploring how regular folks would react if they witnessed a baker refusing to sell a wedding cake to a same-sex couple.

It appears the folks at WWYD weren’t done with LGBT-themed situations.

Today we get to see actors playing homophobic bigots refusing to tip a waitress in a restaurant after they find out she’s lesbian.

The segment is based on a real incident back in 2017 where a waitress in Illinois was denied a tip by customers who had seen her rainbow tattoo. After the guests had departed, the waitress found a zero tip and a note which read, “Can’t tip someone who doesn’t love Jesus – Bad tattoo.”

So ABC News hired two actors to play homophobes who loudly act shocked and offended when the actress playing the waitress shares she’s married to a woman. “Marriage is by definition a man and a woman,” the female ‘homophobe declares for the other restaurant guests to hear.

One yahoo sitting near the ‘homophobes’ agreed with the couple, tossing out this this whopper: “Look at it this way, they can’t have any kids. Nature takes care of it all by itself. So, eventually they’ll wipe themselves out. Give it time.”

But when other diners overhear the plan to stiff the waitress, customers chime in asking, “Her life doesn’t impact your life, does it?”

Another woman was so riled up about the anti-LGBT animus she couldn’t stay seated. And her dining companion threatened to use physical force against the haters.

Watch how it all unfolds below.