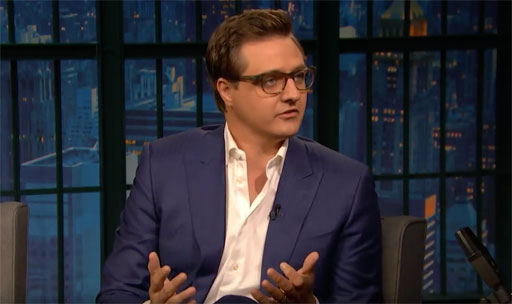 I usually tune into late night talk shows for folks to say something funny or clever.

But in this short segment from Late Night with Seth Meyers, MSNBC’s Chris Hayes succinctly breaks down what’s really behind today’s anti-immigration debate.

In discussing his trip to the southern border of the United States to examine immigration issues, Hayes is asked about Donald Trump going to Duluth, Minnesota, for a campaign rally and raging about ‘the border’ to his supporters there – in a state that isn’t directly impacted by folks crossing any ‘border’ into their state.

So – why do they rage? Because white folks are afraid America won’t be ‘America’ if our demographics shift.

Said Hayes, “It’s not actually ‘the border.’ It’s this idea of ‘invasion.’ The country is changing in ways they don’t like. The border is a convenient metaphor for that anxiety.”