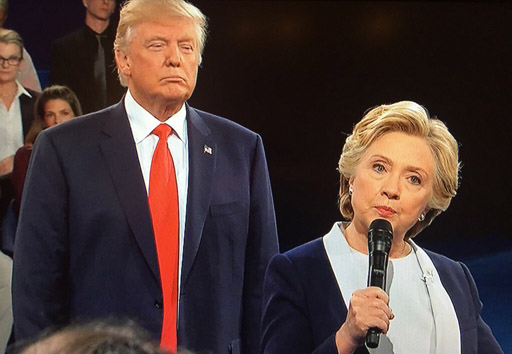 At one point during Hillary Clinton’s answer to a question about Obamacare, he wandered into her personal space in what appeared to be an attempt to intimidate Clinton. And stayed there.

Check this mashup of his lurking:

It seems I’m not the only person to notice.

When Clinton made herself available to reporters on her campaign plane after the debate, she was asked if she could tell that Donald Trump “was standing right behind her,” during her answer to a question about Obamacare. Clinton responded that she could, and that Trump “was very present.”

“It was a very small space,” Clinton said of Trump’s proximity. “And I tried to give him space whenever he was talking to people. I would go back and you know, lean up against my stool. But he was very present.”

This picture is every woman’s nightmare #debate pic.twitter.com/2qojrsLUZZ

This looks like a poster for a 1970s horror movie pic.twitter.com/vCVGrTLdte

Why does he keep lurking behind her? #debate pic.twitter.com/R4lvAlCU3B

Scary Halloween costume idea: Dress up like Trump, go to a party, and stand 3-5 feet behind successful women. pic.twitter.com/tz6STpkccQ

“He’s right behind me, isn’t he?” #debates pic.twitter.com/4hGvvJ5XK2