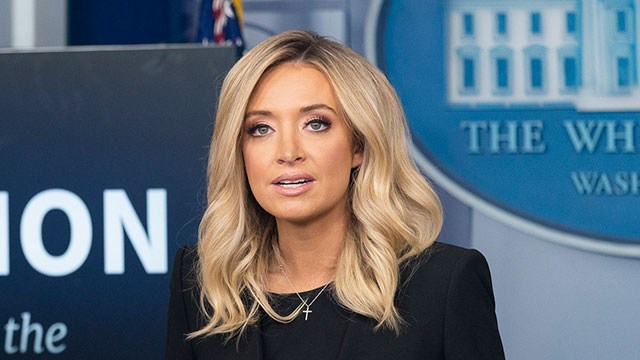 Add White House press secretary Kayleigh McEnany to the list of Trump administration officials who have now tested positive for the coronavirus.

USA Today is keeping a running update on the Trump administration officials and guests who have tested positive for the virus in the past week.

Meanwhile, the New York Times reports Trump is growing more and more concerned his hospitalization due to COVID-19 is making him ‘appear weak.’ The Donald apparently wanted to be discharged from the hospital yesterday, but the doctors disagreed with that plan.

So, instead, he jumped in an SUV with Secret Service members (putting them at risk in such closed, air-tight quarters), and took a loop around Walter Reed National Military Medical Center to wave at followers. #selfish

The Times also reports that the fact that Trump was given a medication usually prescribed to seriously ill COVID-19 patients raised more questions about the severity of his condition.

Mr. Trump’s camera-friendly, morale-boosting “surprise visit,” however, may have masked the reality of his condition, and his seeming energy may have reflected the fact that he was given the steroid dexamethasone, according to medical experts.

Dexamethasone has been shown to help patients who are severely ill with Covid-19, but it is typically not used in mild or moderate cases of the disease.

Moreover, some medical experts said Mr. Trump’s trip out of the hospital was reckless, unnecessarily putting both hospital staff members and Secret Service agents at risk for a stunt. Others questioned the president’s statement in his video that he had met soldiers while at Walter Reed.

I just received word that I am positive for COVID-19. I want to thank all of my friends and colleagues who have reached out to ask how I was feeling in the last day or two. I will be receiving medical attention today and will keep the necessary folks apprised of my condition.

The president had wanted to be discharged from Walter Reed yesterday, but doctors weren’t okay with it. So the car ride became the compromise https://t.co/bwHty5jcaD