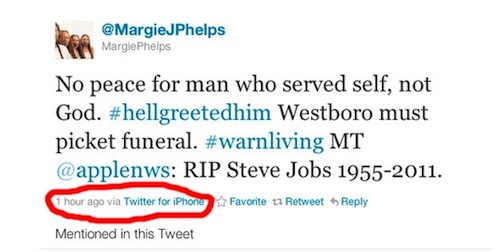 Margie Phelps has announced that the Westboro Baptist Church will be picketing the funeral of Apple cofounder Steve Jobs because he “served [him]self, not God.”

And just how did she make this announcement? By tweeting it from her Apple iPhone.

The Kansas-based organization, which has protested memorials of everyone from victims of gay bashings to those killed in the 2006 Sago Mine disaster — often times with signs stating “God Hates Fags” — has called for “no peace” for Jobs.