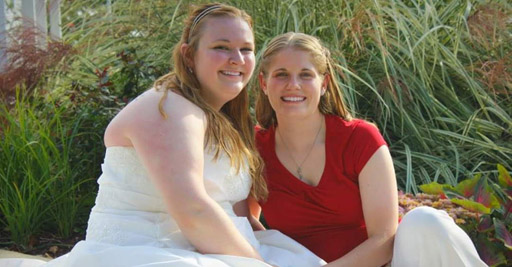 A lesbian couple in West Virginia were told early last year that they were an “abomination” by a county clerk as they applied for a marriage license.

The clerk added at the time, “God would deal with them.”

In April, high school sweethearts Amanda Ambramovich and Samantha Brookover filed suit against Gilmer County in federal court with the help of Americans United for Separation of Church and State, claiming that Deputy Clerk Debbie Allen violated their constitutional rights by discriminating against them under the guise of religion when they applied for a license.

Now, the county has agreed to settle the lawsuit brought by the couple.

MetroWeekly reports on the outcome:

As part of Wednesday’s settlement, Gilmer County has agreed to issue a public statement admitting wrongdoing and apologizing to Abramovich and Brookover. The county also agreed to pay $10,000 in damages to the couple, and has promised to require all county officials and employees of both the clerk’s office and the County Commission to undergo sensitivity training, which will be provided by Fairness West Virginia, within the next four months.

Lastly, the county has agreed to permanently post a sign in the clerk’s office with language stating that the office will serve all residents, regardless of sexual orientation or gender identity.

“Consenting adults should never be made to feel embarrassed or ashamed when marrying the person they love,” the couple told MetroWeekly. “It will be a comfort to know that this behavior will no longer be allowed in the Gilmer County Courthouse.”