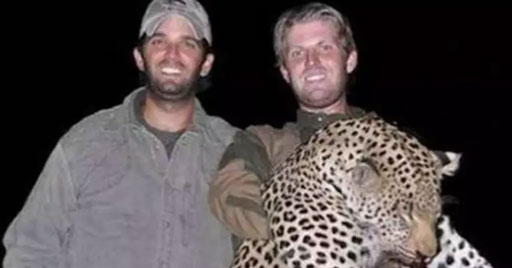 The New York Times reports that a Chicago waitress apparently spit on Eric Trump, one of Donald Trump’s sons, while he was having dinner on Tuesday night.

An official with the Trump Organization, where Mr. Trump is an executive vice president, said the woman who spit on him was immediately handcuffed and detained by the Secret Service and the Chicago police. She was released after about two hours when Mr. Trump decided not to press charges.

Officials with The Aviary released an unsigned statement Wednesday describing “an unfortunate incident” that “occurred between an employee at The Aviary and Eric Trump.” That employee has been placed on leave, the statement said, adding that restaurant officials did not witness the reported spitting.

I don’t condone acts like this, but as others have similarly paraphrased, I’m guessing he wasn’t her type?

And for those folks saying what a wonderful person Eric is, and wondering how folks would have reacted if Obama’s daughters had been spat on, I would point out Eric kills innocent animals for fun, and has been accused of stealing from cancer charities, so…

Trump whined about it the nutjobs at Breitbart News, saying the waitress “clearly has emotional problems.”

“For a party that preaches tolerance, this once again demonstrates they have very little civility,” he said. “When somebody is sick enough to resort to spitting on someone, it just emphasizes a sickness and desperation and the fact that we’re winning.”

TO RECAP:
– Eric Trump got spit on at a bar in Chicago
– NRA spokesperson Dana Loesch got fired
– NRA TV got shutdown
– The Dixie Chicks are putting out a new album

Today is a good day so far.

The server who spit on Eric Trump was detained by police for over 2 hours, I can’t believe it took that long to finish photos and autographs