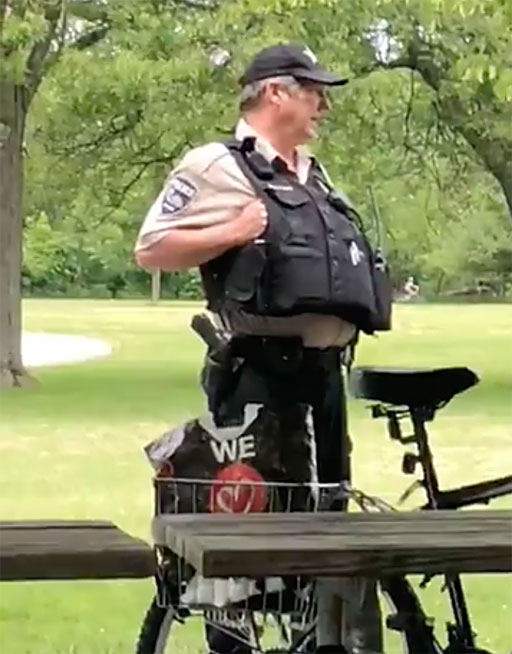 In a video that captured the attention of the Twitterverse this morning, a police officer stands by silent nothing as a woman setting up for a birthday party is harassed in a public park for wearing a shirt with the Puerto Rican flag.

The woman, Mia Irizarry, recorded the assault and posted it to her Facebook on June 14.

Accosting the woman, the harasser (who appears to be drunk) yells at the woman for wearing the shirt telling her, ‘You should be wearing the American flag.’

Throughout the ordeal the man gets in the woman’s face who even as she stays calm while recording the incident.

She calls out to a police officer seen in the background of the video who can clearly see what is happening. But the officer just wanders off.

“Officer, I feel highly uncomfortable. Can you please grab him? Please, officer,” she says. The man continues ranting, while the officer doesn’t acknowledge Mia Irizarry’s call for help.

Watch below the stunning video below.

You can watch the full 36 minute video on Facebook here. It is astonishing how the officer does nothing to aid the woman.

The harasser was eventually arrested & charged with assault & disorderly conduct.

The officer was identified as working for Forest Preserves of Cook County in Illinois.

The police officer who refused to intercede has been put on desk duty for now.

About the man seen in the viral video harassing a woman wearing a Puerto Rican shirt, he went to jail. But, the agency that employes the cop who ignored the victims requests for help – only put out a statement after we called. The incident happened June 14https://t.co/G7Wom0dxWa pic.twitter.com/iIPJVAba0Z

Begnaud reached out to the agency that employs the officer and received no response. But a half hour after his contact, the agency released this statement:

“All people are welcome in the Forest Preserves of Cook County and no one should feel unsafe while visiting our preserves. After the June 14 incident, we immediately launched an investigation pursuant to our personnel policies into the response of our officer. The investigation is ongoing and the officer involved has been assigned to desk duty pending the outcome. The intoxicated individual involved in the incident was arrested and charged with assault and disorderly conduct.”

As Begnaud notes in his video report, the agency didn’t address the issue with the public until the video took off on Twitter earlier today.