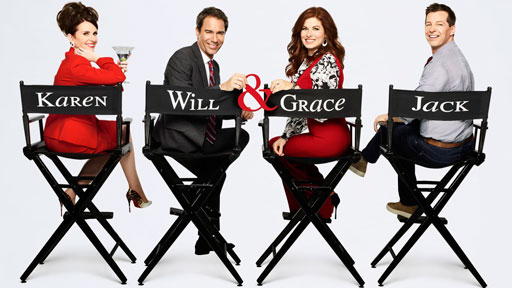 In a bonus video from the new DVD, Will & Grace (The Revival) Season One, the stars of the show chat on the experience of coming together again after an 11 year hiatus to the incredible reception from the audience.

Sean Hayes was admittedly surprised by the reaction. “It’s like, wow, people still really enjoy the show and want more of it,” said Hayes. “And we’re so thrilled to supply that, you know?”

The roller-coaster ride continued as production began. Everything was “a moment.”

“We’re done shooting the first scene, and it’s all very electric in the room, and there were so many laughs from the audience,” says Megan Mullally.

Debra Messing on taping the first new episode: “It was profoundly emotional. I think we were all surprised by it. There really is nothing that compares to the experience of a live taping.”

“It was fantastic to be front of them again,” said Eric McCormack. “We felt like rock stars and we had so much fun. And the material’s so good – these writers are on fire.”

“I’m excited and proud of what we’re producing,” he added.

The new DVD collection contains all 16 episodes from the latest season (which would technically be season 10 for the show) as well as a blooper reel and a special behind-the-scenes look at the taping of the first new episode.

Thanks to the overwhelming response, NBC has already ordered TWO more seasons of the hit sitcom.

Look for new episodes this fall and check out the gang below as they look back on the first new season of Will & Grace.