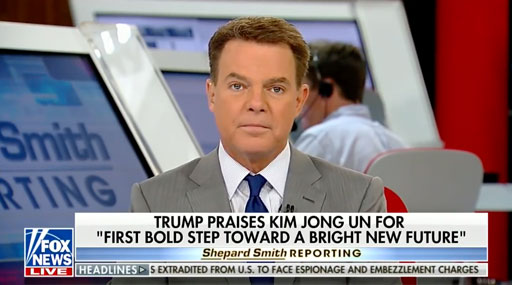 This is how Shep opened his show today:

“The United States made concessions in exchange for no hard promises, stopping joint military exercises with South Korea while North Korea makes a vague commitment to work together towards denuclearization. The agreement the leaders signed is very short on specifics. But Kim Jong Un, he wanted the photos, the seat at the table.

“He wanted the legitimacy that came with the event, the handshake with America’s president, and he wanted those military exercises with the Americans and the South Koreans that happen every year to stop. Kim Jong Un got it all for actually doing nothing.

“Plus, he got a promise, lacking specifics, granted, of security for the North Korean regime. A regime that has an estimated 120,000 political prisoners across the nation. A regime that tortures and murders its own citizens, imprisons children for the actions of parents and grandparents, and a leader who has committed crimes against humanity.

“President Trump insisted the people of the most entrenched land in all the world, North Korea, love their leader. President Trump says he trusts Chairman Kim, and that he’s ready to start a new chapter with North Korea. What will the president’s special bond with Kim Jong Un mean for the US and its allies? No specifics. No specifics of how to do it. No timeline on getting it done. No verification, no inspection. No, nothing else — just generalities.”