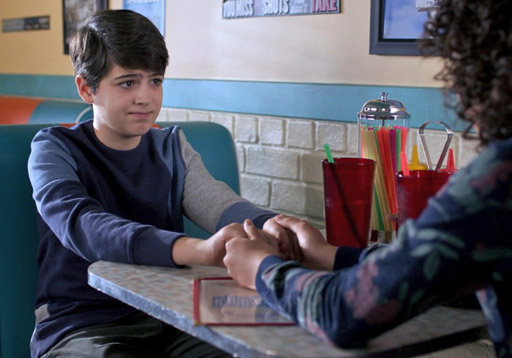 Last week I reported on the upcoming “coming out” storyline for the Disney Channel’s Andi Mack series.

On the season 2 premiere last Friday, audiences were touched by this sensitive moment when series regular “Cyrus” (played by Joshua Rush) confides in his friend “Buffy” (Sofia Wyle) that he is conflicted by his feelings of jealousy.

“Jonah” (Asher Angel) and “Andi” (Peyton Elizabeth Lee) have just begun officially dating, and Cyrus is at odds with the news.

“How come? Are you jealous, Cyrus? Do you like Andi?” Buffy asks.

“No,” he says, quietly looking away.

Cyrus will explore his burgeoning sexuality over the course of season 2, as well as journey through the dreaded coming out process so many LGBTs experience in our early teen years.

This is the Disney Channel’s first series to have an openly gay series regular. Andi Mack is currently the most popular series on the network among young girls.

Never thought I would see the see the day that Disney channel of all networks would have a gay character and story. Kudos. #AndiMack pic.twitter.com/LavwBt7ql2